A substantial number of pop-up lanes are being constructed to accelerate the emergence of the connected cycle network proposed and agreed in Camden’s 2019-2041 Transport Strategy. Each new segment connects to the existing segments of the network.

The Eastbound pop-up lane runs from Haverstock Hill to Castlehaven Road, connecting with the C6 cycle route. Signage and road markings are needed at the Castlehaven Road junction to indicate that the safe connection is via Castlehaven Road and Castle Road rather than the junction with Kentish Town Road.

The white lines and flexible bollards were installed very quickly in July and then the more detailed work started, for example, the very nice design of the junction with Queens Crescent.

Two shared-use bus boarders (SUBBs) have been installed and one more is expected opposite Harmood Street.

This consists mostly of 2m lanes behind parked cars and a stepped track on the approach to Haverstock Hill. Continuous footways have been built across every junction on both sides of the road (Crogsland Road is the last and almost complete). Four bus stop bypasses have been built and one more (opposite Ryland Road) is still to be built. There are some nice details e.g. the new cycle parking opposite the Talacre Road junction. The work started in September 2019 and is due to finish soon.

The southern end of the York Way pop-up lanes will connect to C6 via Goods Way and to a pop-up lane proposed by Islington along Copenhagen Street as well as a quiet route via Wharfedale Road.

This comprises mandatory cycle lanes varying in width between 1.5m and 2.6m (depending on road width and maintaining a minimum motor-traffic lane) and protected by flexible ‘wand and kerb’ sets between Wharfedale Road and Freight Lane. Work started early in July with painting of the white lines and installation of the bollards and is nearing completion. On the Islington side, there are not yet any bollards on the southern section. Two SUBBs have been built on the Camden side but none yet on the Islington side. The junction improvements needed at Freight lane, Copenhagen Street and Goodsway are delayed until stage 3.

The northern end of the York Way pop-up lanes will connect to the existing east-west quiet route through Camden Square, Cliff Road and Hungerford Road. Eventually they will connect to TfL’s planned Tottenham – Camden Town Cycleway.

They will continue north from Freight Lane to Hungerford Road / Cliff Road with mandatory cycle lanes both sides side of the road, protected by flexible ‘wand and kerb’ sets.

The Chalk Farm Road pop-up lanes will connect with the Prince of Wales Road lanes and link to Camden Lock and to Primrose Hill and Regent’s Park via the Regent’s Park Road ‘painted bridge’.

Camden Council proposes to build pop-up cycle lanes on Chalk Farm Road – Haverstock Hill between the junctions of Castlehaven Road and Prince of Wales Road and to improve the junction at Ferdinand Street. The work has started at the northern end with mandatory cycle lanes both sides side of the road, protected by flexible ‘wand and kerb’ sets. 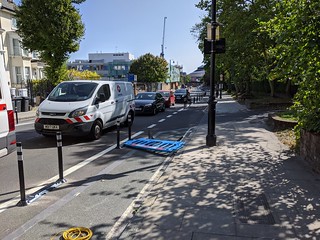 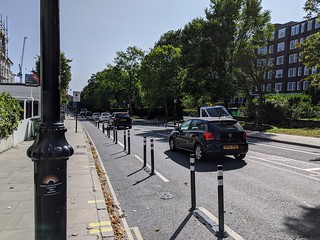 The Gray’s Inn pop-up lanes will connect with C6 and the Tavistock Place tracks. They will link with planned routes on Rosebery Avenue, Theobalds Road and Clerkenwell Road.

This scheme was consulted on in October 2019 and will be implemented under an ETO starting this month. It consists of protected cycle lanes in both directions on Gray’s Inn Road, from Harrison Street in the north to High Holborn in the south plus improvement of the junctions of Gray’s Inn Road with (a) Sidmouth Street/Ampton Street and (b) Guilford Street/Calthorpe Street as well as continuous footways at all side road junctions.

Camden Council proposes to build a pop-up cycle lane southbound on St Pancras Way from Wilmot Place to Pancras Road. This will be a mandatory 2m (or down to 1.5m where the road is narrow) wide cycle lane with flexible bollards.

Haverstock Hill (north): Tory councillors are objecting; we have asked supporters to write to councillors and we sent a letter to the CNJ. Haverstock Hill connects to the Prince of Wales Road tracks and extends the network to Belsize Park and to the Royal Free Hospital via Pond Street.

Adelaide Road: could be next

TfL: pop-up lanes in Euston Road and Hampstead Rd etc were completed a month ago

Camden has published the plans here. The map shows the locations of the proposed interventions 1-6 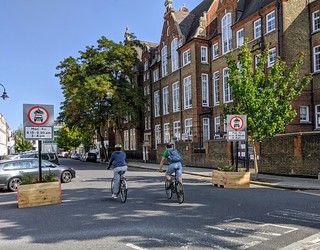 The Neighbourhoods of the Future scheme in Hampstead (west of Fitzjohn’s Avenue) is delayed until the end of September. But five new schemes (Marsden Street, Crogsland Road, William Road, Holly Bush Vale and Sandall Road) have just been announced.

You can see a map showing all the Covid-19 related infrastructure projects here.