This new route along Chalk Farm Road and the southern end of Haverstock Hill has added just over 1km of protected cycle lanes to the network in Camden (half a km on each side of the road), bringing the total length up to 21.5km. The map extract below shows the nearby protected routes in purple and signed routes on quiet roads in dark orange. 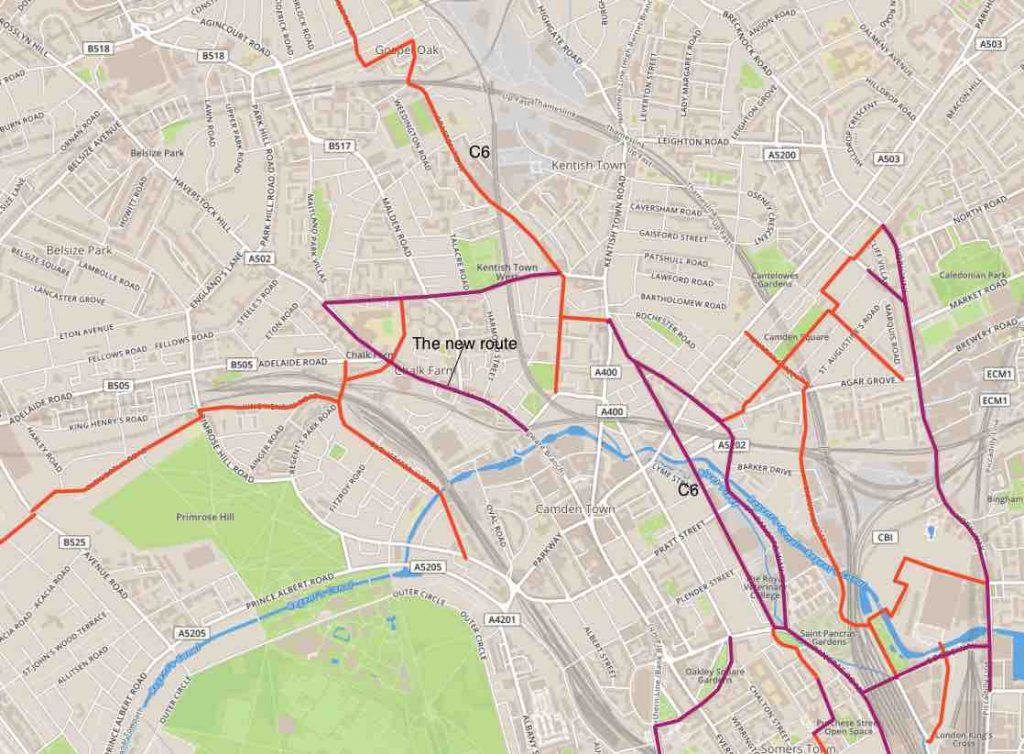 Map 1: Context of the new route on Chalk Farm Road

Description of the new cycle lanes

Map 2: The end of the southbound journey

The cycle lanes are 2m wide and are protected by flexible bollards. They are on both sides of the road. On the southbound side, they start from Prince of Wales Road and end at Hartland Road – where Chalk Farm Road becomes rather narrow.  Continuing the journey south is tricky because the road (Camden High Street) is one-way northbound after the railway bridge. Assuming that the majority of cyclists will be wanting to continue onto Hawley Road then they can turn left into Hartland Road and then use the cycle tracks across Castlehaven Open space to access the junction of Castlehaven Road and Hawley Road (blue line on our map), possibly continuing via Jeffreys Street to join C6 on Royal College Street. Some signage here will be useful.

On the northbound side, the cycle lanes start from the bus bypass outside Stables Market and continue all the way to the junction with Prince of Wales Road. 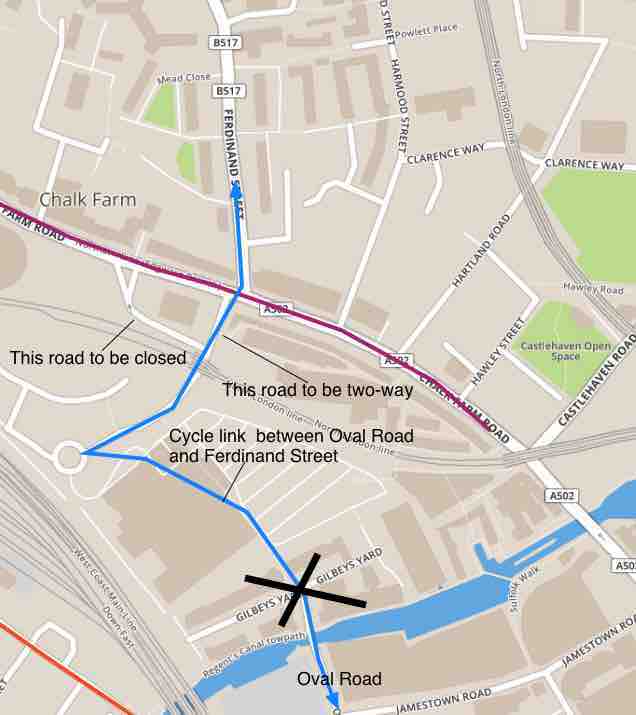 This junction had to be re-designed to take into account the planned changes on the Morrisons site which involved the removal of the one-way system between the railway bridge and Chalk Farm Road. Our map shows that one road is closed while the other (Juniper Crescent) becomes two-way.

There has for many years been a useful cycle link between Oval Road and Chalk Farm Road through the Morrisons site (blue line). But an island in the middle of Chalk Farm Road had prevented anyone from accessing Ferdinand Street.

The new design of this junction allows cyclists (only) to cross in both directions between Ferdinand Street and Juniper Way. This was achieved by removing the island in the middle of Chalk Farm Road which also made room for a new pedestrian crossing over the eastern arm.  Unfortunately, the developers have closed the path through Gilbey’s Yard, making it impossible to use the link between Oval Road and Ferdinand Street until at least late 2025. Railings on Chalk Farm Road outside Morrisons temporary store: these would have been a hazard to cyclists and have been removed. Have a look at the photo where you can see that the railings are gone, that the footway is wider and bike stands have been installed.

No work has been done on this junction. We would like to see extra turn options for cyclists so that they are able to make both left and right turns from the approaches on Adelaide Road, Crogsland Road and Regent’s Park Road. We would also support left turns out of and right turns into Adelaide Road for all traffic so that the rat running through the Steeles Road can be stopped. But to make these safe cycles would need protection with at least early release.

There are five bus stops on this route, three northbound and two southbound. The stops on Haverstock Hill serve two routes (168 and 393) while those on Chalk Farm Road serve additional routes (24, 27 and 31). With a large footfall and many bus services, the best solution is bus stop bypasses. This has been made possible by staggering the stops on Chalk Farm Road with stops outside Stables Market and outside the Round House on the northbound side; while the single stop on the southbound side is between them.

Note that each bypass cycle lane narrows down to 1.5m and is marked up with ‘SLOW’ and with zebra markings on the raised section corresponding to the tactile paving where passengers are expected to cross the cycle lane. At the time we took the photos, the bus stands had not yet been moved onto the islands but these long islands provide plenty of room to accommodate them.

On Haverstock Hill, the bus stop on the northbound side has a bypass but the stop opposite outside Haverstock School has not been adapted for the cycle route. The bus pulls up to the kerb and cyclists must either wait or ride round the bus.   The road looks too narrow for a bus stop bypass? We could ask for a SUBB (shared-use bus boarder) here but it might not be suitable as the road is downhill and cyclists may not be good at stopping as well as there being crowds of schoolchildren at certain times. 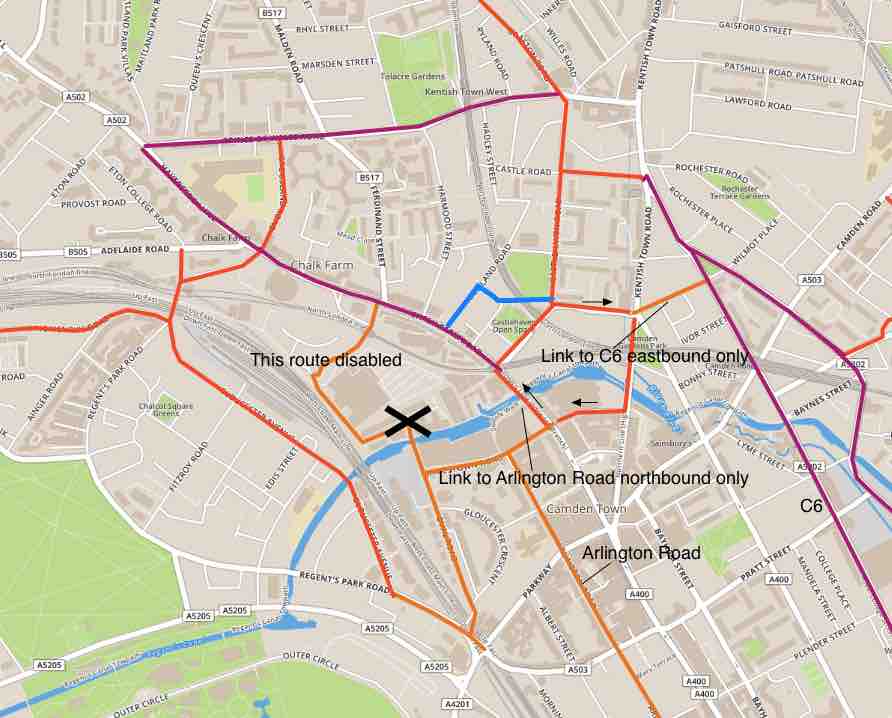 Map 4: Connections to the southern end of the route on Chalk Farm Road

This is a very well-designed and implemented stretch of new cycle route that links well with the route on Prince of Wales Road.  We very much hope that Camden will be able to extend it northwards up Haverstock Hill (consulted on earlier this year).

Unfortunately, the connections at the southern end are very inadequate.

Link to C6 is eastbound only: In Map 2 we described how to access C6 via Hartland Road and Hawley Road. As shown in Map 4, Hawley Road is one-way eastbound.

Work urgently needs to be done to enable the westbound route, for example by providing:

Link to Arlington Road is northbound only

Since the creation of the low traffic neighbourhood, Arlington Road, which was always a really useful north-south route, has become suitable for use by all.  The same can be said for its connections along Jamestown Road and Oval Road. But, as shown in Map 4, Camden High Street is one way northbound.  We would like to see signage for this northbound route.

With the route via the Morrison site disabled (Map 3) a southbound connection could only be achieved by reallocating some footway for cycling.

You can give your views on Camden’s Commonplace engagement here: