Adam Harrison at our October meeting

We expressed our ‘asks’ regarding Camden’s proposed updates to the Transport Strategy and Adam gave us his reactions.

John Chamberlain introduced Adam Harrison as the Camden Cabinet Member for a sustainable Camden and invited him to make some introductory remarks. 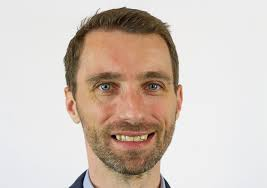 On the divisiveness of LTNs* raised by Sheila Hayman. Camden hasn’t done as many as Islington, which may have been behind much of the protests against the initial schemes there. In terms of how best to talk about such schemes, it is often best to be starting from a problem that needs solving e.g. there was an issue of too much motor traffic in the Arlington area and in Murray Street. Before the pandemic there were already 80 road closures in Camden which can be seen to be beneficial e.g. in the Camden Square area – pointing this out can also cause people to think differently about changes.

*  LTN – Low Traffic Neighbourhood.  For various reasons, mostly related to campaigns against LTNs, they have been given a variety of names (e.g. Camden calls them Safe and Healthy Streets; Islington People Friendly Streets. And Steve will refer to Safe & Healthy Neighbourhoods – a name that we think retains the idea of safety and health, yet distinguishes areas from roads.

Updates to the Transport Strategy presented by Steve Prowse 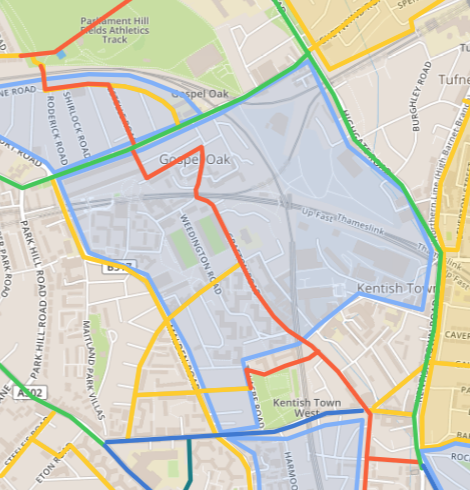 Steve explained that he has accepted the role of LCC Climate Safe Streets (CSS) Champion for Camden. In this role, he has led the preparation of a set of CSS strategies and targets which are to be presented to Camden transport officers for inclusion in the forthcoming Revised Transport Strategy and Action Plans, and to candidates as ‘asks’ for the May 2022 Council Election.
Steve presented a set of slides defining our campaigning position on how to achieve Climate Safe Streets by 2030. The slides and can be downloaded from our website here.
The presentation includes a description of CCC’s 2030 Climate Safe Streets map. This map shows how a set of protected cycle routes on main roads together with a set of Safe & Healthy Neighbourhoods (LTNs by another name), backed up by secondary routes on quiet roads can be combined to meet the target that by 2030 every resident (who does not live in a Safe & Healthy Neighbourhood) would be within a 200m reach of a Safe & Healthy Neighbourhood or high quality protected cycle infrastructure.

All new junction designs to conform to LTN 1/20.

The revised targets relate to increased active travel and a corresponding reduction in motor travel, to the provision of cycle training and cycle hangars.

Adam’s reaction to our presentation

Remarks from the floor and Adam’s reactions

Steven Edwards: Congratulations on the rapid growth of the cycle network; Cop 26 is going to fail … people believe that electric vehicles are the solution.

Sheila Hayman: No to cars even if electric.

Adam: EVs are part of the mix; we are not in a position to have a borough-wide LTN; there’s a lot of work to do to create a network of LTNs connected by big roads with crossings. Bloomsbury Superblocks (new to us and something we need to learn about. See )

John Chamberlain: Camden has already brought forward targets and should build on that

Stefano Bertolotto: Camden is at the forefront and should be encouraged to keep going – people will like the change in the end.

Ema Arvati: How do we encourage people to stop driving?

Adam: by changes to the roads, parking policy and teaching behaviour change.

Adam then wound up by thanking us for our support for the council when the proposed Haverstock Hill scheme was called in.

We all thanked Adam and clapped as best we could on Zoom.