Background to Campaign at St Pancras

About 60 people on cycles, many with banners joined the demo. Report on the Demo From 14 November 2007, Eurostar services to Brussels and Paris depart from St Pancras International. The station building is a wonderful mix of Gilbert Scott’s gothic extravaganza, Barlow and Ordish’s train shed repainted sky-blue and the new modern concrete structure…. [Read More] 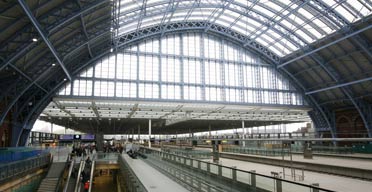 About 60 people on cycles, many with banners joined the demo. Report on the Demo

While appearing modern, when it comes to cycles the new Eurostar service is
stuck in a time warp. Again and again cyclists are told that it is no
one’s fault, the problem is that everything was laid down by act of
Parliament – the Channel Tunnel Rail Link Act 1996 – at a time when cycling
was unimportant.

But if the longest champagne bar in Europe – something we
have been unable to find mention of in the Act – can go in, why not safe
and secure facilities for cycles?

The saddest example of the consequences of this Act is perhaps the case of the new ASL box at the bottom of Camley Street. This was rushed in after a cyclist was killed by a left-turning cement lorry. Article from Camden New Journal    Article from London24, 7-11-07

Camden Council and CCC agreed that the lead-in lane should be offside, or failing that, non-existent. However, it was implemented on the left – luring unsuspecting cyclists into the danger zone. We were told that the Act specified a lane on the left – but did they have ASLs in 1996? Camden Council promise to move it over when they get the road back from CTRL – but will that be too late? Cycle parking at St Pancras International consists of about 30 unattached substandard loops at the far end of the car park, about 5 minutes walk from the ticket office. While inadequate for Eurostar customers, this small facility is supposed to be shared with cyclists using Midland Mainline, the Thameslink station which moves here in December 2007 and from 2009 domestic high speed services to Kent

Transport for London has stepped in to provide a cycle parking facility which is intended to
be opened in 2011. However with other such facilities, such as at London
Bridge running two years late, it is unlikely to be open in time for the
Olympics and the high speed Javelin service to the 2012 games.

Besides St Pancras International having the worst cycle parking of any major
station in the UK, it also is positioning itself as truly grand retail
and hospitality destination for London.

Sadly the mistakes of high
profile developments such as Paternoster Square and Spitalfields Market
have not been learnt: the private developers have failed to include any
cycle parking for visitors to the shops and restaurants and there are no
cycle stands in the adjacent streets.

This is despite the claim that Everything at St Pancras International has been designed from the visitor’s point of view. More research has been
commissioned, more customer profiles analysed, and more habits and
preferences studied than for any British railway station.

If anything is breathtaking, it is the hyperbole rather than the “retail experience”.

On hearing of the planned demo, cycle stands for 100 bikes were erected in the Car Park in time for 14th November with a promise to install more as soon as they become 80% occupied.

Midland Road has been reopened with 3-4 lanes southbound at the junction with Euston Road and with no provision for contraflow cycling. This is not for lack of asking: since the late 1990’s, CCC has been campaigning against making Midland Road one-way. Buchanans Report for TfL on “Kings Cross Area Modelling”, June 2005 failed to take account of cyclists – in fact, cyclists were not mentioned even once.

CCC studied Buchanans report and made arguments based on estimates of traffic flow that Midland Road could accommodate contraflow cycling.

In June 2006, TfL commissioned Buchanans to carry out a study on Cycling Strategy for Kings Cross. A draft report was discussed at a meeting with Camden Council in December 2006.  The final version was given to us early in November 2007

This is shown as “Link 2” on our access map. This link would allow cyclists to travel between Route 6 in Ossulston Street and the entrances to Thamslink and Midland Mainline Stations via Brill Place. This works southbound but would require a contraflow in Midland Road for northbound access. The need for this link was expressed in the section on Stakeholder feedback but the link is not recommended. At a meeting on 7th November Camden and City Cyclists urged Camden Council officers to implement this link.

Cyclists have been promised two-way access in Pancras Road, but in August, Camden Council published a traffic order specifying that Pancras Road will re-open to northbound traffic. The council confirmed that southbound cycling would not be allowed until 2011-12. But after a meeting, it was conceded that cyclists could use the taxi lane to travel southbound. This was confirmed by a traffic order.

The new St Pancras Thameslink Station will open in Midland Road in early December. Cyclists approaching the station on the north-south Route 6 in Ossulston Street will be able to access it via Brill Place. Unfortunately when they try to make the return journey, they will need to walk northbound on Midland Road as far as Brill Place. The need for a contraflow has been made repeatedly by CCC via Camden Council – see for example

The spur to St Pancras from the Stations Circular Cycle Route 0 remains unsigned
despite it having been cyclable for a number of years. The lack of a sign here has led to a new incorrect sign at the junction of Marchmont Street that directs westbound cyclists to go to the stations via Euston Road.

This spur requires some minor improvements which are described in the
page about the spur from Route 0.

The only new cycle route signage to the stations is:

The brand new cycle lanes around the station position cyclists going
straight ahead or right inside left turn only lanes for motor traffic: the
manoeuvre that has the highest risk of a fatal collision. A two-way cycle
track on the eastern side of Pancras Road which was promised in the act of Parliament has
now been altered to contraflow cycle track to be implemented at an uncertain date in the future.

In the introduction to London cycle Design Standards, TfL’s director Peter Hendy still manages to claim that while
initially we had much to learn
from our northern European neighbours [following record investment] London
now has examples of cycle-friendly infrastructure to match the best.

While these neighbours are now a short train ride away, don’t count on
taking your cycle with you…

Despite announcing on its site that “we’d love you to take your bike”
Eurostar does not permit you to take your cycle with you on your trip. In
fact while travel across and border checks between European countries are
simpler than ever, if you have the misfortune of taking a cycle by rail it
can feel as difficult as trying to cross the Iron Curtain. For
international trips, making a cycle reservation across the Channel is
near impossible.

On the one hand you can take your cycle to pieces and put it in a special
bag. Not only is this difficult to carry at the station, even more so if
making cross Paris or London transfers, but you may also have to lug the bag
around during your trip abroad. Some cycles such
as tandems and recumbents won’t fit into such bags.

Alternatively four of the eight Eurostar stations will permit you to deposit
your cycle so that it can be conveyed as registered baggage, meaning you
either have to go to London 24 hours before your trip or wait at
Paris/Brussels for 24 hours before you can go further. Furthermore, this costs £20 each way when tickets start at £59 return.

On hearing about the demo, Eurostar promised that from early 2008, it will be possible to book a bike onto a particular train so that you can travel with your bike. Look at the photo to see how the public space has been transformed at Paris Gare du Nord : quite different from the 4-lane one way gyratory on Midland Road!. Although far from ideal Gare du Nord has cycle parking for 90 cycles although these are not secure.

We hope to organise a joint demonstration with Provelo at Brussels Midi and Velorution at Paris Gare du Nord.
At Brussels Midi a bike station with space for 300 cycles has been promised since 2000. However it is clearly not a priority for Infrabel, the Belgian answer to Network Rail, which is instead building parking for 1650 cars.
Article by Provelo