Work started early April 2013 and will continue until early August

As most of you know, Camden carried out a re-design of the cycle tracks on Royal College Street and then consulted on the scheme late last year. Work started in April and is now nearly complete. Unfortunately, unrelated works by Thames Water (replacing old water mains) and UK Power Network (new high voltage electricity tunnel) have caused additional problems and delays and BT also wanted to dig the road up, hence the delay. 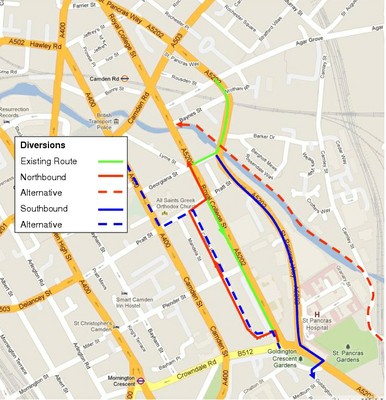 Most of the preparatory work is done and now they are currently installing the new segregated tracks and resurfacing the road, in stages starting at the south end. This started on July 27th and should be complete by August 10th.  During this period, southbound cyclists will be directed via St Pancras Way. Northbound cyclists will be directed up College Place, but there will be a period of a few days where you will be asked to dismount between Crowndale Road and College Place and, later, between Pratt Street and Georgiana Street.  This is unfortunately unavoidable so if you don’t want to do this you will have to avoid the area either by using Camden High Street or Camley Street and the canal towpath between Kings Cross and Baynes Street (see map opposite, click it for larger version).

If you don’t fancy the southbound diversion, you may want to consider using Camden Street and then turning left on Pratt Street and right on College Place. But you will have to dismount at the bottom.

The engineer in charge, Diljeet Singh, has asked us to display his email details and phone number which are Diljeet.Singh AT Camden.gov.uk, tel 020 7974 5106, in case anyone has questions. Or you can email us at john AT camdencyclists.org.uk (email addresses disguised to put off spammers).