Usage increased with the new tracks, so Camden Council have installed a cycle counter; post-implementation improvements and news about the northern and southern extensions 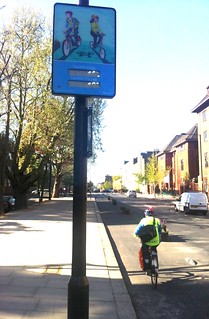 The new lightly segregated cycle tracks in Royal College Street have been with us since last August. A key element of the scheme was to remove the previous bidirectional cycle track (on the west side of the carriageway) and to introduce a pair of 2m wide cycle tracks.  See our report on the new scheme. In doing so southbound cyclists are less likely to be involved in collisions at side road junctions as they have better sight lines and they are more visible to motorists. This southbound route has now become more popular with people who formerly used St Pancras Way.

Counts made in December 2013 show that the number of people using the tracks had increased:

We urged Camden Council to consider installing one of the internet-linked electronic cycle counters with a roadside display that have recently become available. They agreed on the basis that it will be valuable to have an ongoing record of usage as this route is extended and other new routes are linked to it. The cycle counter arrived earlier this week and started to record just before Easter: it counts the cycles on both tracks. The photo was taken a couple of hours after the counter was started and showed a count of “180”. For some reason the figures don’t show in the photo – a technical problem with the phone camera used.

The counter was supplied by Traffic Technology Limited. Here is an example of what the system can do. This is a public element of the Eco Visio software from sites around Lake Luzern in Switzerland.

All traffic humps were removed from the street as a trial and raised junctions were introduced at the side roads. The carriageway was narrowed from 2 traffic lanes to 1 traffic lane. The street is a 20 mph limit and has been for several years. Speeds have been an issue because of the straight and wide nature of the road even with extensive traffic calming.

Results of speed surveys in December 2013, giving the 85th percentile. 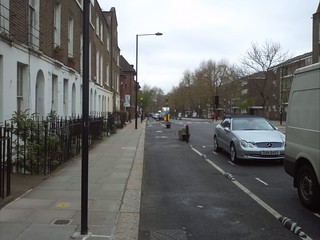 The following improvements have been made following a post-implementation review of the scheme involving CCC and Camden officers.

Following planters being damaged by drivers reversing their motors into them when trying to park: 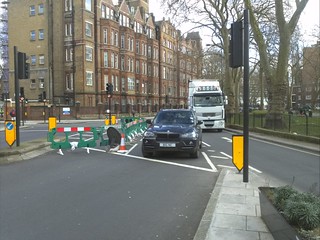 There are two motor lanes on the approach from Pancras Road; one of these has been closed with traffic cones since February 2014. This had the immediate effect of improving safety for cyclists waiting at the southern end of the RCS track. This shows the following to be feasible:

These will be consulted on soon after the local elections.

The next challenge is to complete the route to Judd Street with a contraflow across Euston Road.