Report on a circular ride from Flitwick Station with lunch at Shuttleworth collection and tea at St Mary’s, Haynes.

For the fourth time, George led a train-assisted anti-clockwise circular ride from Flitwick to the Shuttleworth Aircraft Museum at Old Warden in Bedfordshire where we stopped for lunch. The outbound route went via Silsoe and through Wrest Park where we struggled up and then down the stony track across the fields to join quiet roads as far as Shefford where we turned north and soon joined some more quiet roads through picturesque countryside, through Old Warden village to our lunch stop. The return route included a stop for tea and home made cakes at St Mary’s Church, Haynes. Finally, we hurried back into Flitwick to catch the train back to London.

Six of us got into the train with our bikes at West Hampstead and were astonished to be greeted by another half dozen who had joined the train earlier, including two families with young children – it’s a good thing that the new trains have plenty of bike space. We set off from Flitwick station at about 11:15. 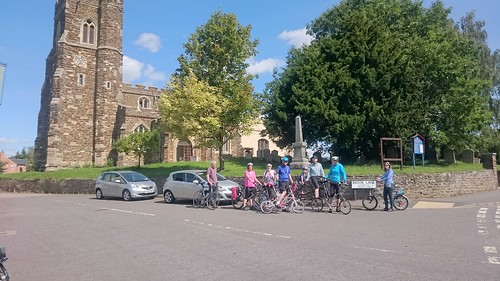 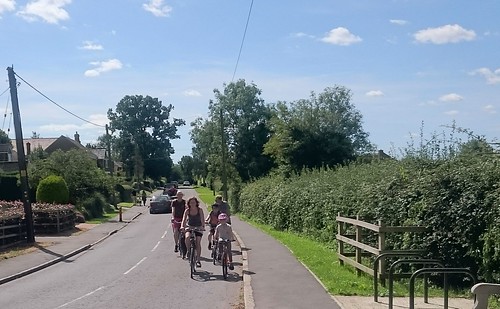 Here we are, having escaped from the busy roads of Flitwick, assembling outside Flitton Church 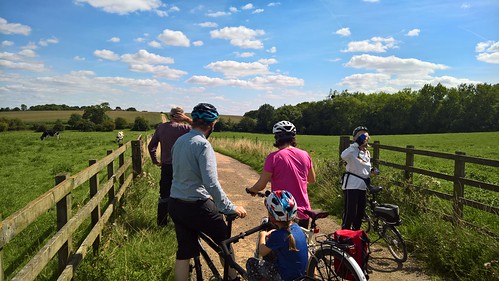 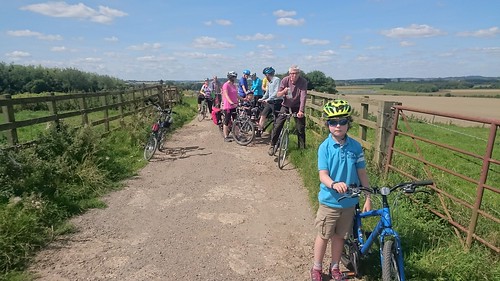 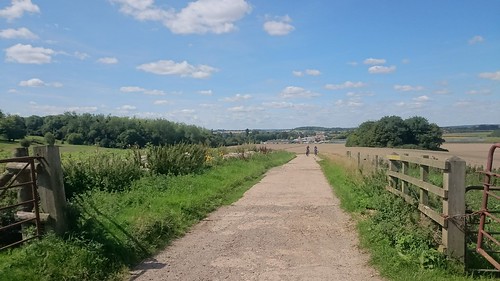 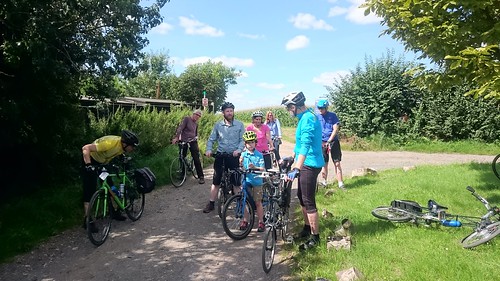 On the left you see people happily coasting down the slope. On the right, we stop while people check that they haven’t picked up any sharp stones in their tyres. 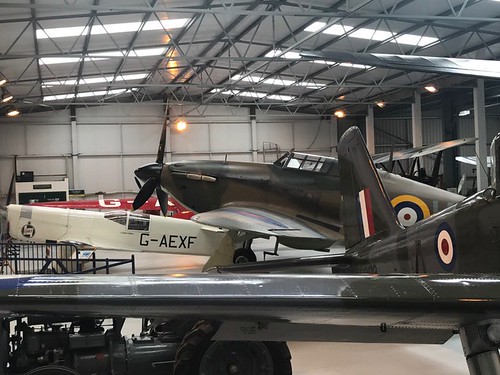 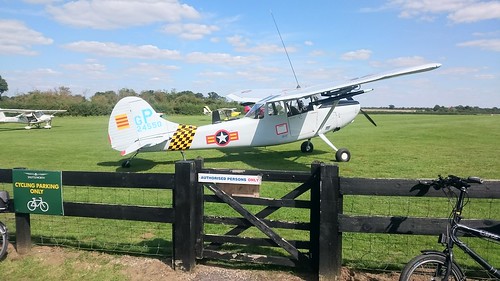 Scenes from inside the Shuttleworth Collection and from the nearby air field.
We noted that the plane on the right was carrying rocket marker flares. 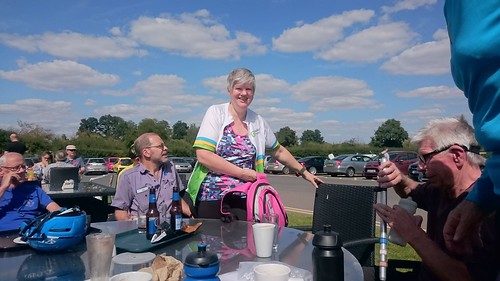 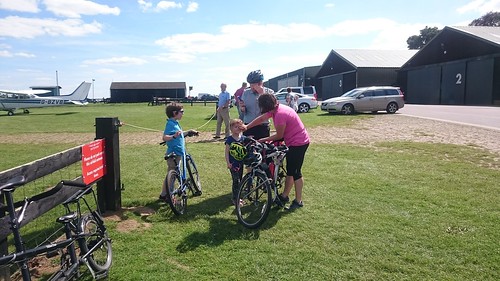 Here we are having lunch outside the cafe. Although some of us brought our own sandwiches, most of us enjoyed tea/coffee from the multiple choice warm drinks machine. 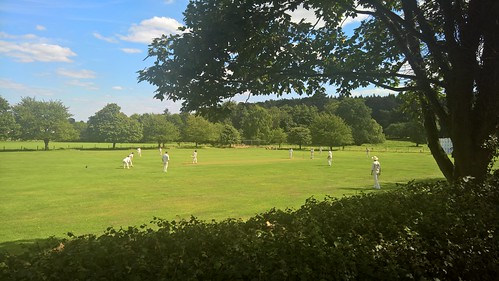 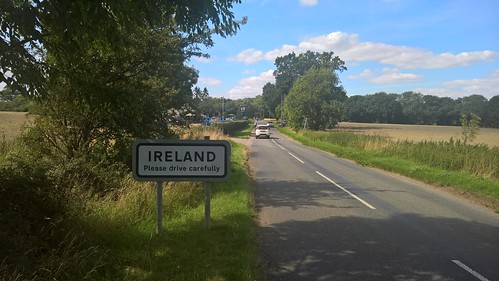 On our way back through Old Warden village, someone spotted the cricket club at play.
When we saw we were in Ireland, we realised that we might have taken a wrong turn. But we soon righted ourselves and headed towards the tea stop. 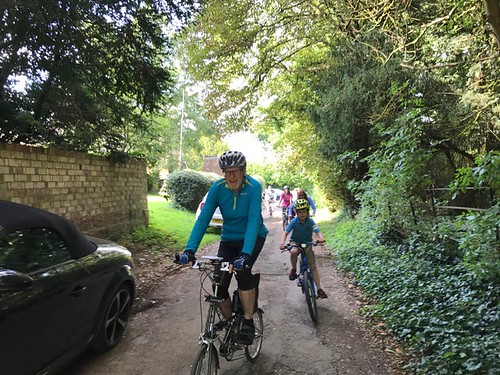 George led the group down a leafy lane and after we’d parked our bikes, we went into the church where we were greeted by very friendly ladies offering us oodles of tea and suggesting that we choose one of their delicious cakes. They seemed very pleased to see the children, especially after Clara said ‘this is a very nice place’! 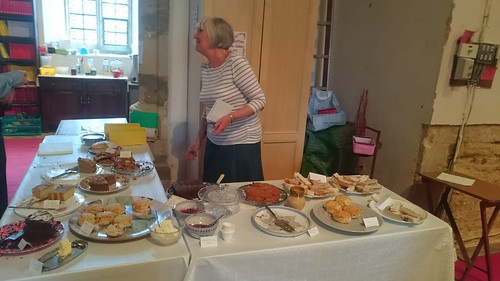 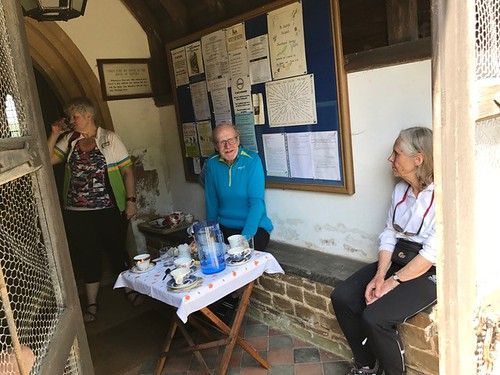 They set up tables in the porch where most of us sat to enjoy the cakes and several refreshing cups of tea. Others sat cooly under the beautifully trimmed bushes – and the children claimed to have eaten up to four pieces of cake. They certainly deserved it after all the heroic pedalling. 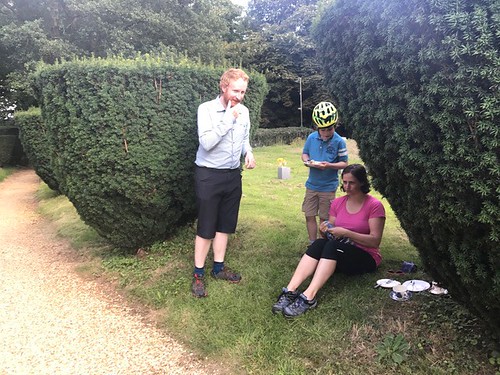 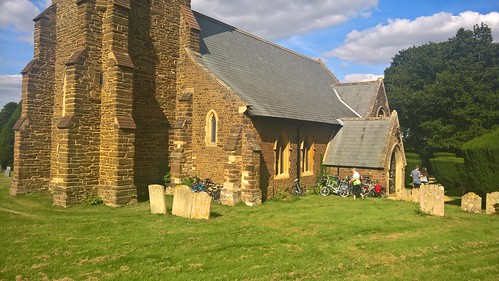 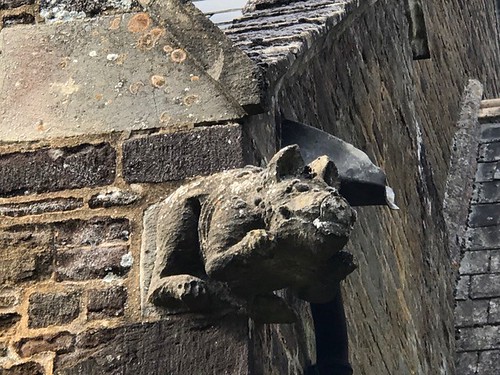 On the left is a view of St Mary’s church  with our bikes parked outside and on the right an architectural detail that most of us missed.
Feeling strengthened by the tea and cakes, we set of once more on the last lap back to to Flitwick Station, arriving at about 5:15pm.
Here is a trace of our route on gpsies. If you run your mouse cursor over the altitude profile below the map,the route on the map will be indicated. The distance we rode was 47km.
The photos were taken by Amory Clarke, Caspar Robinson and Jean Dollimore – you can see some more here on our Flickr site.
Reports on previous years’ rides:
George’s Bedfordshire Ride 2016
George’s Bedfordshire Ride 2015
Beds Ride 2012