Following our deputation and the opposing petition, councillors agreed officers’ recommendations after a debate. 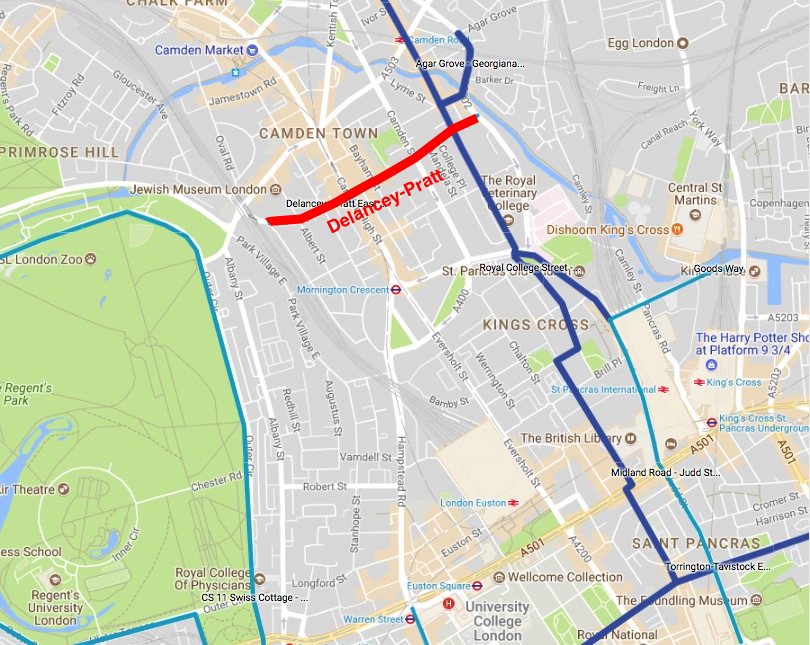 Delancey – Pratt is an essential east <–> west cycle link across the Camden Town gyratory and just as we thought construction would start, a group of residents has presented Camden Council with a petition against it. As the petition has over 500 signatures, it was debated at the full council meeting on Monday 20th November.

John Chamberlain leading our deputation in support of the Delancey – Pratt scheme.  The opposition will almost certainly bring a crowd. Therefore we too need supporters in the gallery.

John Chamberlain read our Deputation Speech.  We were very pleased to see so many supporters in the gallery and it was encouraging to hear the clapping.

The opposition read out their petition. Councillors then questioned John and the opposition and put their points about the scheme. Then Cllr Adam Harrison answered the points. The decision went through on the nod and was to follow the officers’ recommendation that after further meetings with interested parties to discuss the HS2 modelling results they would send another report to Cllr Harrison to decide whether the recommendations for Phase 1 agreed in December 2015 should be amended or refined and whether Phase 2 should be consulted on.
We had asked council to tell the director to go ahead as consulted but this was never going to happen. So the result was as good as we could have expected and we got a chance to put the arguments.

Officers’ Report for the meeting on 20th November

You can read the Officers’ report on background here .

Here is a summary of the report:

The report considers both Phase 1 (consulted on and approved in 2015) and Phase 2 (to continue through the Parkway junctions to Gloucester gate). See Map showing phases

In response to residents’ concerns, Camden has had both phases modelled, taking into account the HS2 works.

The petition opposes the decision on a variety of grounds including claims that:

The officers’ response is interesting in that it suggests that implementing Phase 2 will ameliorate Phase 1 and they suggest monitoring followed by possible mitigation. They also provide arguments against the likelihood of increased rat-running on any one of Arlington Road, Albert Road and Mornington Terrace.

For next steps, officers recommend meeting with interested parties to discuss the HS2 modelling results; then presenting a report to the Cabinet Member for his decision on the following:

Way back in 2015, after consultation, Camden approved a proposal for a two way east-west segregated cycle route across Camden Town along Delancey Street and Pratt Street (generally referred to as ‘Delancey-Pratt’). See Consultation on Delancey – Pratt, Aug 2015.

The Dec 2015 officers’ report on the consultation makes it clear that a large majority of respondents (85%) are in favour of the scheme. Even among residents of Delancey Street and the western end of Pratt Street (where there are planned to be segregated tracks) there was a majority in favour. But some local residents have always objected and are using this process to try to get the decision reversed.