A long-established & popular north-south cycle route has been severed for a lengthy period to accommodate construction work.

Camden Council has recently started work on the redevelopment of Edith Neville Primary School which is the first stage of a plan to add new housing and improve public spaces in the area. This has resulted in a set of unresolved problems for people cycling through the Somers Town Cycle Route.

The affected tracks form a part of the Royal College Street and Somers Town north-south cycle route, one of the longest-established in Camden.  See the 1984 video ‘GLC Cycling for London’ which includes (at 12:46) the Somerstown section of this route. People have been using the route for over 30 years and more recently in very large numbers. The electronic cycle counter on Royal College Street shows that weekday counts regularly exceed 2000 cycles and a high proportion of these continue through Somers Town. These flows show very pronounced peaks at the morning and evening commuting times indicating that many people rely on the route for getting to and from their work or place of study.

We had a site meeting with Camden officers in mid September and were astonished to be told that the CMP (construction management plan) for Edith Neville School involves closing the footway and segregated cycle track on Purchese Street so that that the builder’s HGVs can access the site across the cycle track in Purchese Street. At that stage they didn’t mention Polygon Road.

The route through Somers Town is shown in blue in the map below. We discussed alternative routes and at that point the Camden officers seemed to be open to a variety of possibilities. The first was to enable an alternative but considerably longer northbound route via Brill Place and Pancras Road, which they carried out – this is shown in purple in the map below. Diversion signs were placed in Ossulston Street and Brill Place well before the work started but people couldn’t understand why they were being diverted. We suggested that a route via Chalton Street and Charrington Street (as shown in the CMP, see below) was quite feasible and could be improved by adding a  ramp to access the paved area at the bottom of Charrington Street – shown in turquoise on the map below.

Camden hadn’t suggested any satisfactory southbound route by the time the entrances to the building site were set up in December. 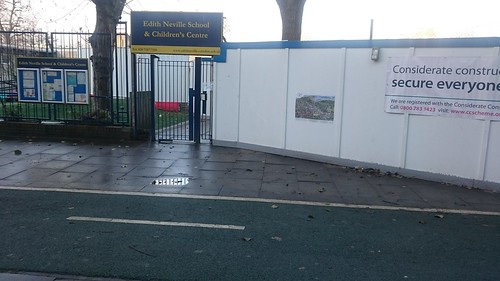 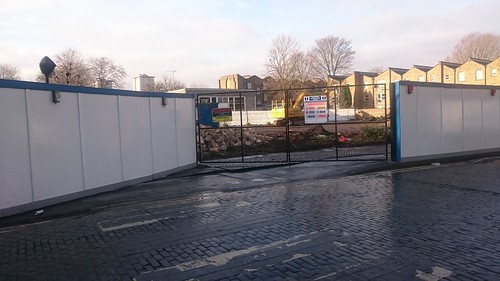 The photo on the left shows the entrance across the cycle track in Purchese Street.

The photo on the right shows the entrance beside the cycle track in Polygon Road. As can be seen, the latter has very little impact on the available space on Polygon Road. We would have thought it quite reasonable to allow cyclists to continue to use the track on Polygon Road. 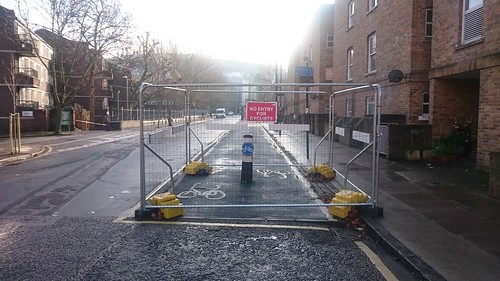 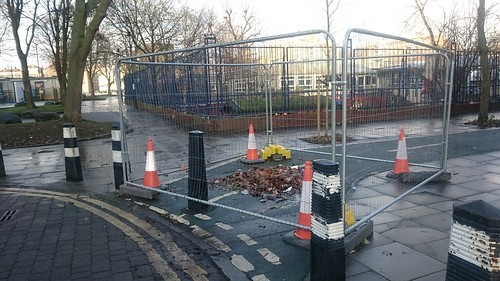 People cycling southbound on Purchese Street are greeted by the view shown in the photo on the left (the red label says: ‘NO ENTRY FOR CYCLISTS’). They have no choice but to carry on by riding on the cobbles. When they reach the junction with Polygon Road, they will find that too is blocked and will be forced to ride on over the cobbles as far as Brill Place.

Meanwhile the photo on the right shows the view into Polygon Road from Ossulston Street.  A few enterprising people were seen cutting round the end of the barriers but this isn’t very convenient. Others who know their way around cut across the paved area and continue up Charrington Street.

There are currently no suggestions from Camden as to a satisfactory alternative route. Following further discussions with the same Camden officers just before Christmas, we were at a deadlock. They claimed that it is illegal to cycle through the square at the bottom of Charrington Street (although this route is shown on the CMP) and that they intend to sign a diversion at the northern end of the cycle track directing southbound cyclists to Brill Place via Purchese Street (i.e over some very uneven and sometimes slippery cobbles). 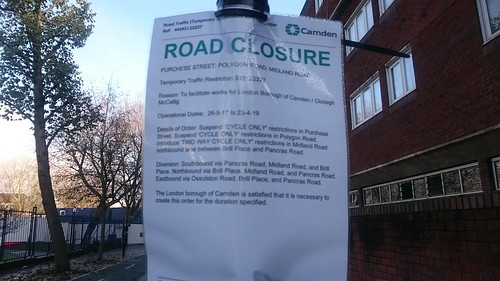 On inspection we spotted the traffic order on the lamp posts at either end of Polygon Road (photo on the right). This dates the closures from September 2017 to April 2019 and refers to taking out two-way cycling in both Purchese Street and Polygon Road. It also proposes that both north and southbound alternative routes should be via Midland Road – a diversion that adds 170m in distance or 30%, and worse, requires cyclists in both directions to cross a signalised junction and another intersection and for southbound cyclists to make a difficult right turn across two lanes of often heavy motor traffic and buses.

Early in January, 2018, we took a look at the CMP (construction management plan) on Camden’s website. This shows alternative routes for cycling throughout the entire project. In the first stage the proposed alternative route is via  Charrington Street as shown in the extract below. 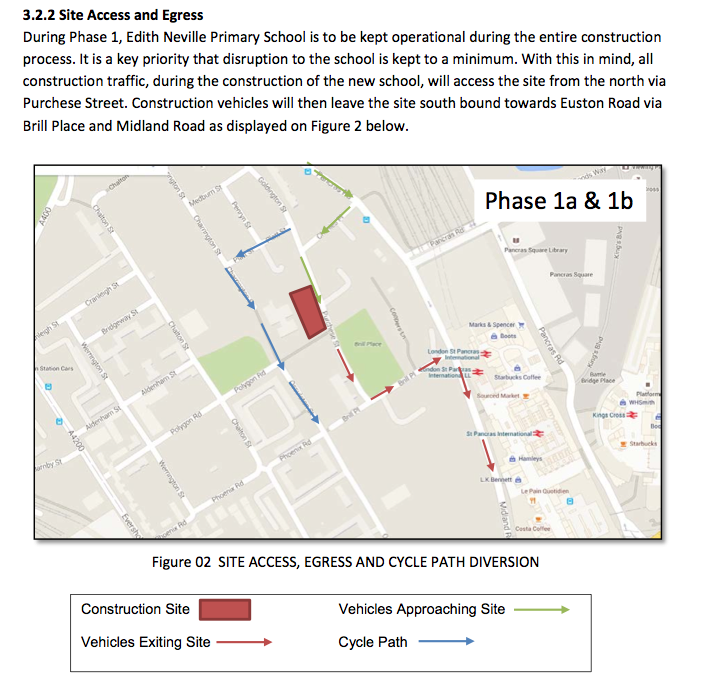 With this knowledge, we wrote to a more senior Camden officer to request a site meeting to discuss both this current problem and the more long term issue of the final alignment for this cycle route.

At a meeting with officers on 12th March, we were told:

When we pointed out that we have asked repeatedly (since last September) for temporary tarmac on Purchese Street officers agreed to look into a short term solution.

On 13th June, during our nearby 2018 Cyclists Breakfast on Ossulston Street we ran a petition to Councillor Harrison calling on him to “initiate action to remedy the currently very unsatisfactory situation as quickly as possible”: 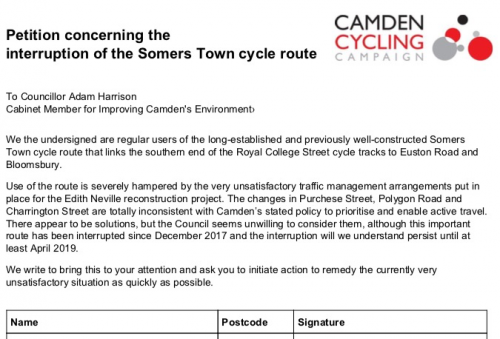 The petition attracted signatures from 238 passing cyclists in less than 3 hours and we submitted it to Councillor Harrison on the same day. He said that officers were ‘preparing a solution’.

We eventually heard that the proposed solution comprised:

At a subsequent meeting with the relevant officers we pressed for the provision of a smoothly-surfaced strip of Purchese Street between Platt Street and Polygon Road (e.g. using tarmac or re-laid cobbles) and the provision of clear signage to indicate the intended route. Our request was refused.