Ben Knowles co-founder of Pedal Me was guest speaker at our meeting on 16th August 2019. 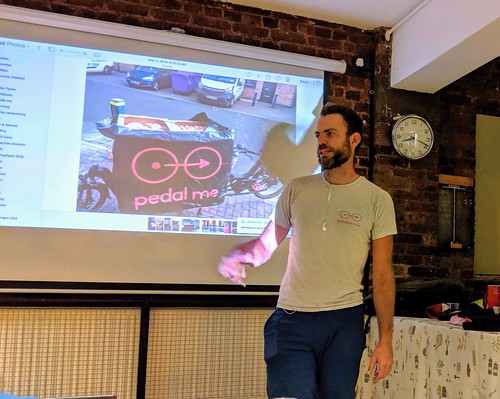 Ben Knowles is an old friend from his time at Camden Council, last coming to talk to us in January 2017 about Camden’s first Healthy School Street at St Joseph’s School in Macklin Street.  Even then, Ben showed a photo of him pedalling a cargo bike with a passenger.

Very soon after that, Pedal Me was founded.  As Ben said:

With multiple bikes it is a low-cost way of, for example, carrying 250 boxes of flowers and saves CO2, the main cost being people’s (the riders) time. The business grows at an average rate of about 20% per month.

The service includes the ability to carry either passengers or freight as well a consultancy on cycle logistics.

The riders are thoroughly trained in house and they require extra validation before being qualified to carry passengers or to carry an additional trailer load.

Although there is no legal requirement for registration or insurance, all of Pedal Me‘s bikes have registration numbers and insurance.

Thefts are followed up and the bikes recovered by a procedure involving the team and eventually, police officers who are very supportive – Pedal Me has a ‘do good deeds’ policy. The bikes have dutch wheel locks for use when doing deliveries and anyone trying to ride them away while locked in this way will puncture the tyre or break the wheel.

The weight limitations depend on what a rider can take; and they employ five women including a mechanic. It is a policy to train people for the future after six months service e.g. to become mechanics.

TfL is supportive, e.g. using Pedal Me on Car Free Day and their implementation of cycle tracks is very useful too.

Pedal Me doesn’t advertise, relying on people to tell others, but they do give away caps and T-shirts.

Ben noted that scaling up is interesting: to start with there is an economy of scale: the logistics make it sensible to have bikes scattered over an area so that one of them may be near to the next job and there is plenty of scope for expansion.

But when working for large companies (which do provide a lot of work), Pedal Me experiences a problem common to all start-ups, which is that big companies don’t pay until the end of the month (or even longer) and you need a large bank loan to cover the lack of cash to pay the workers. Individual users pay through the App and get a discount.

You can discover more on the Pedal Me website is here. If you want to use the service, you can book it via an App on your phone.

The second photo shows Ben pointing to a photo on PedalMe’s Instagram site – which you can find at this link.

Paul, a member of our committee had worked for PedalMe for a few months earlier this year gave an illustrated talk while we were waiting for Ben to arrive. Paul told us about his two weeks training, of the living wage paid by PedalMe and showed us photos of some typical loads including a trailer full of Freddie’s Flowers and a delivery for a coffee shop shown in these two photos. 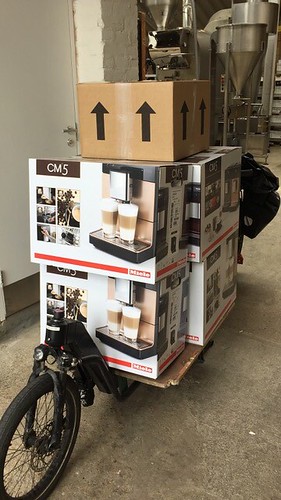 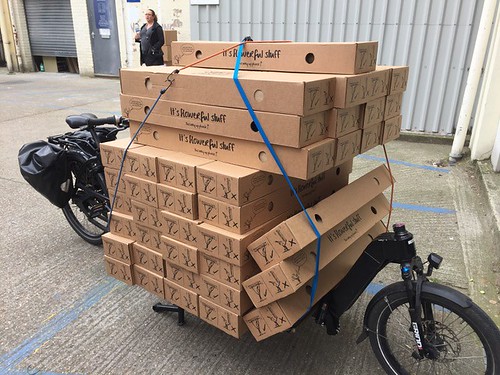 Paul Allen’s photo of a delivery for Freddie’s Flowers