An alternative to a school street, an extension to the York Way route and a possible cycling route to school 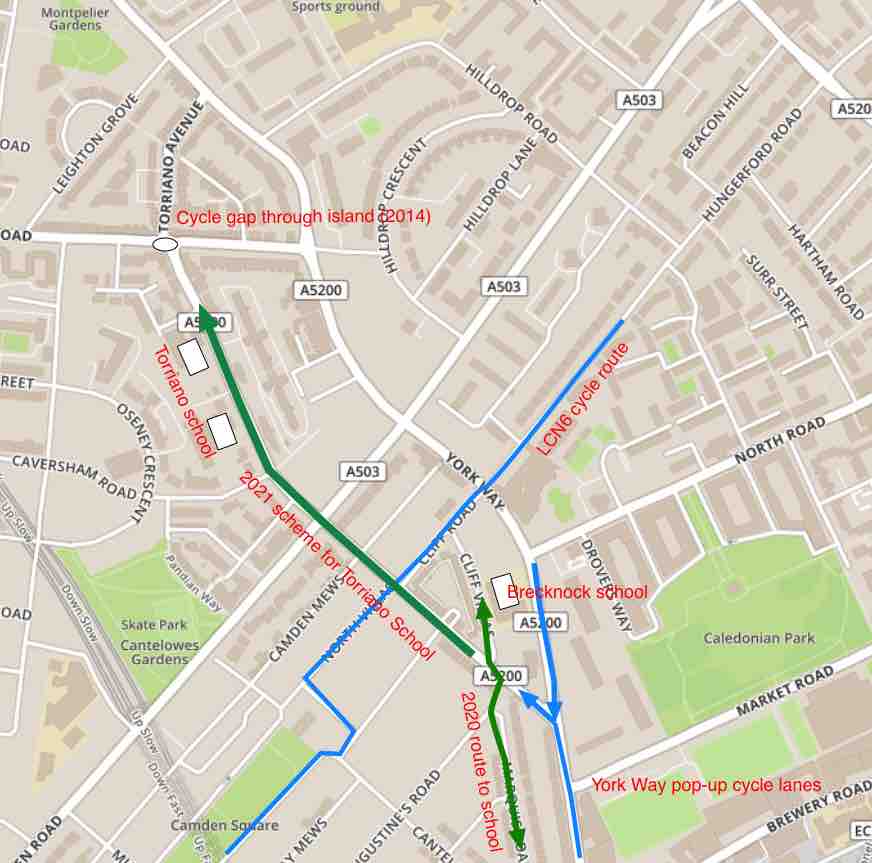 In this post we describe one recently completed scheme and refer to three others that between them have resulted in radical changes in Camden Park Road and Torriano Avenue. The entrances to Torriano School are on Torriano Avenue – a road that is classified as a “borough distributor” and can’t currently receive the usual school streets treatment (a closure at school arrival and departure times). Instead, Camden has installed a 24/7 bus and cycle lane and moved all the other motor traffic into the second lane (away from the school).

They have also widened the footway outside the school entrances by building it out over former parking spaces.  Motor vehicle speeds appear to have been reduced significantly by the replacement of speed cushions by three new genuinely sinusoidal speed humps (which offer a revelation in the ride quality for cyclists when compared with almost all the others in Camden and more widely).

And there is no place to park a car outside the school. The new work has resulted in a 24/7 bus and cycle lane along the part of Camden Park Road north of the bus stop bypass opposite Cliff Villas. There is a short break at the junction with North Villas and Cliff Road where the few left-turning motor vehicles move into the left lane.

The junction at Camden Road still needs upgrading but with the new bus lane most of the way it is easier to access the cycle box. The road has been narrowed to a single lane here so no motor vehicle can pass a bus at the stop. 3. Cycle gap in  the island at Leighton Road

This change was made as a “Quick Win” in 2014 – see our account. It enables people to continue to cycle northbound up Torriano Avenue. The island was put in many years ago so as to prevent traffic from taking a shortcut towards Brecknock Road.  In those days they didn’t seem to consider exceptions for cycling. These were completed last Autumn. They extend between Wharfedale Road and Hungerford Road and are described in our Mid-October Infrastructure update.

The photo shows the approach to Camden Park Road

The new changes in Torriano Avenue provide an example of what to do for safety and air quality when you can’t actually close a street for a few hours each day. Torriano School is on the west side of Torriano Avenue. With the bus lane in place, there is nowhere for a quick drop-off outside the school. The occasional bus does not seem to be a threat (390 every 4-7 mins and 393 every 10-13 mins).

The moving of all general traffic into a single narrow lane on the east side, together with the speed humps has had a very strong calming effect and also moves the majority of the pollution sources away from the footway. 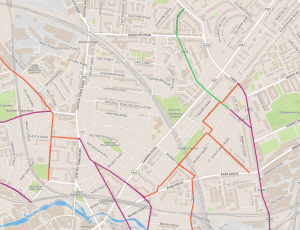 The map at the top of the page and the one on the right shows that these developments have resulted in a continuous northbound route all the way up York Way, through Camden Park Road and Torriano Avenue up to Brecknock Road.  The York Way route is shown in purple and the extension in green. The main weak point here is the need to improve the junction with Camden Road.

The “Camden Square” route is shown in orange – this is part of a long route from Islington to Waterloo Bridge formerly known as LCN+ 6. There are rumours that this is to be part of a route called C50 and is TfL’s attempt at the Camden Town to Tottenham Hale Route. So the extension links the York Way route to C50.

Our study in 2019 on “Barriers that prevent people cycling to school” identified “Barrier B” described as follows: “Need protected 2-way cycling on Torriano Avenue and Camden Park Road and a safe crossing over Camden Road”. This was related to the following routes:

All of these routes have been improved in the northbound direction. For the first, this benefits the ride home. For the other three, it benefits the ride to school. Although we suggested a two-way cycle track on Torriano Avenue and Camden Park Road we can see the point of the bus and cycle lane. But a similar improvement is required for southbound journeys by making a radical change in Brecknock Road south of Leighton Road. Perhaps a bus and cycle lane between Leighton Road and Hungerford Road together with a safe crossing over Camden Road?

You can give your views on Camden’s Commonplace engagement here: