Home / News / Death of another cyclist in Holborn

Death of another cyclist in Holborn

When will the LN funding be released so that the gyratory can be removed?

Most people will have heard the very sad news that Marta Krawiec, a childrens’ doctor, was killed in a collision with a lorry on 4th August at the junction of Southampton Row and Theobalds Road.

We understand that Marta was hit by an articulated lorry turning left into Theobalds Road across her path when she was proceeding south on Southampton Row. 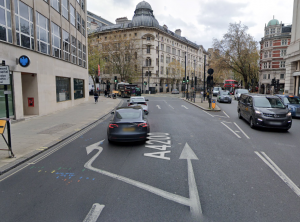 The layout of the approach in Southampton Row is very dangerous, with no ASL and the nearside lane changes at the last minute from a bus lane to a left turn only lane.

This junction is part of the dangerous Holborn gyratory where 5 cyclists have been killed in the last 8 years. In 2019, Camden won funding for a Liveable Neighbourhood for Holborn which would enable them to remove the gyratory and make much better use of the surrounding streets. But the funding was frozen last year (2020) and has not been released.

On Thursday 5th August, at the fatal junction, LCC launched a petition to demand London’s leaders take action on dangerous junctions now to prevent further needless loss of life. This was attended by John Chamberlain and George Coulouris as well as Eilidh Murray and John Hartley and reported in the Standard.

All proposals that involve signals have to be vetted by TfL even when on borough roads. This involves modelling and agreement by the bus managers and not only takes excessive time but also often results in rejection of what look to us like good schemes. In particular, after the deaths of two cyclists on Vernon Place, Holborn in 2013 and 2015, Camden worked on safety designs but these were delayed until 2018 when Camden put in 2 left-turn bans on Vernon Place.