The new proposals for the Southampton Row-Theobalds Road junction

Our assessment of the design – does it go far enough to make it safe?

Following the fatal collision on 4 August 2021 which resulted in the death of Dr Marta Krawiec while cycling to work, Camden Council installed interim safety measures at the junction of Southampton Row and Theobalds Road early in October. See our report.

Camden is now consulting on a more permanent scheme to improve safety at the junction. See the consultation. The scope of the changes is limited by the state of the roads on the four arms of the junction which is at the centre of the Holborn gyratory. For example, westbound cyclists have to use a contraflow bus lane through the junction.

On Twitter, @CargodadC asks “does it go far enough to make it safe“? And @BloomsburyAir ask for a discussion on two-stage right turns. While @London_Cycling says “A big leap forward, but far from perfect. For a transformational scheme here, TfL needs to deliver promised funding/” 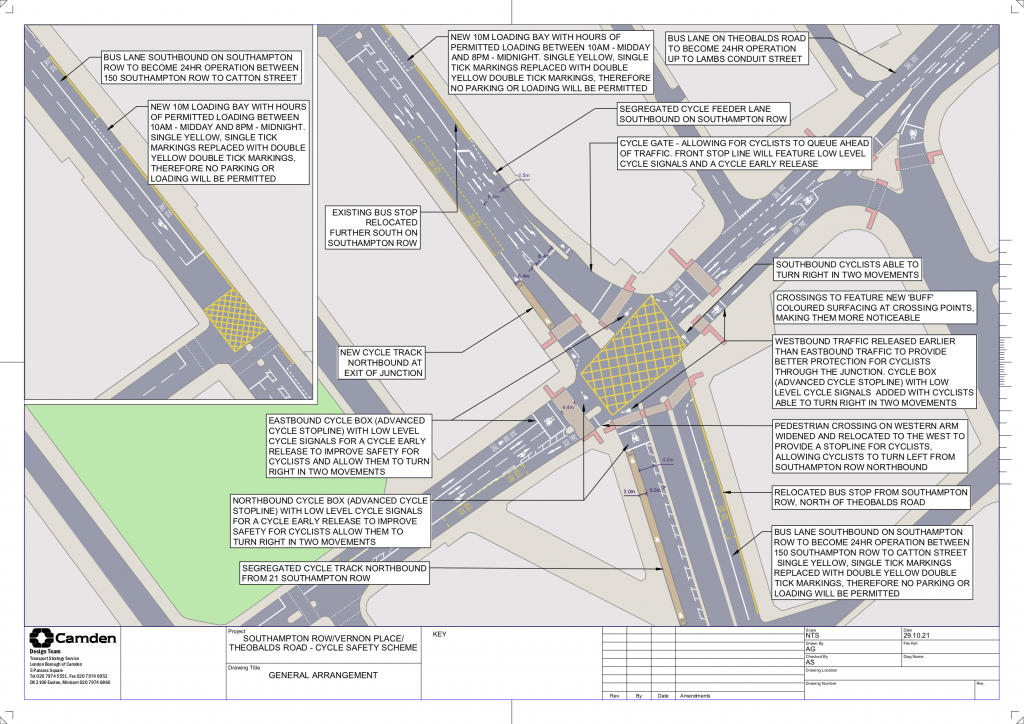 The scheme drawing from the consultation

An assessment of the original layout 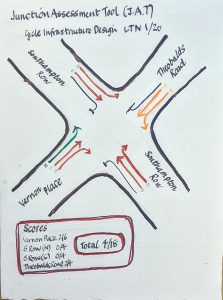 Assessment for presentation at the die-in. Since 2019 motor vehicles on Vernon Place have been prohibited from turning left.  So we decided to award a score of 2 and a green arrow for this manoeuvre†.  The right turns out of Theobalds Road and Southampton Row (N) and the left turn out of Southampton Row (S) are banned.  Red arrows represent critical failures and any new design containing them should not be funded. Amber arrows represent conditions acceptable for 70% of cyclists, while green arrows represent conditions suitable for all potential and existing cyclists.          †As the approach is in a bus lane, we now think the score should have been amber.

We will use the Junction Assessment Tool from Appendix B of LTN 1/20.

For presentation at the die-in on 20th August we calculated an assessment of the junction as it was then. This is shown on the left and was awarded a score of 4/18 – which should have been 4/24 since the banned turns should be included.

Scoring: On each arm of the junction, a cyclist should be able to turn left, go ahead or turn right. If a manoeuvre is safe enough to be suitable for all cyclists, we award a score of 2 and draw a green arrow. This requires that three things are sufficiently safe: the approach to the junction, the crossing and the arrival on the destination arm.  Any risk of left hooks while crossing the junction will result in a zero score and a red arrow.  This was the case for the southbound movement on Southampton Row.

The point of arrival in Theobalds Road was shared with all motor vehicles and had railings on the left.  We had observed cyclists being squeezed in on their arrival. Taking into account the heavy traffic flows*, this accounts for three more red arrows.  Similar arguments apply to arrival in both arms of Southampton Row.

For westbound cyclists in the bus contraflow lane, we awarded a score of 1 and an amber arrow.

An assessment of the design now proposed by Camden

The following measures will enhance the score considerably 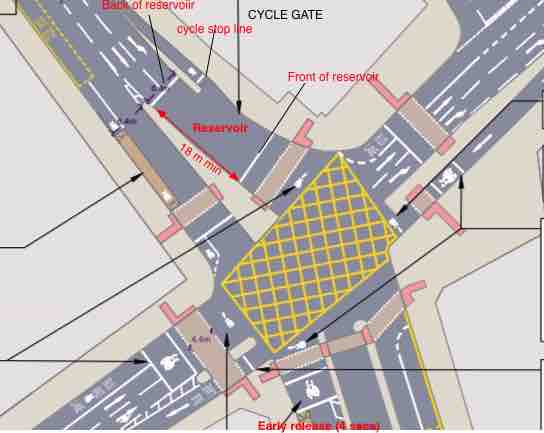 But what about motor vehicles turning right from the Southampton Row (S) approach?

We understand that the early release on the Southampton Row (S) approach will hold the motor vehicles back for the same period of 4 seconds. We are not sure that this is sufficient to avoid conflicts between southbound cycles and right turning northbound motor vehicles.

The JAT scores for entering this gate and crossing the junction would be green but they must be demoted to amber as each move arrives in a bus lane of some sort. 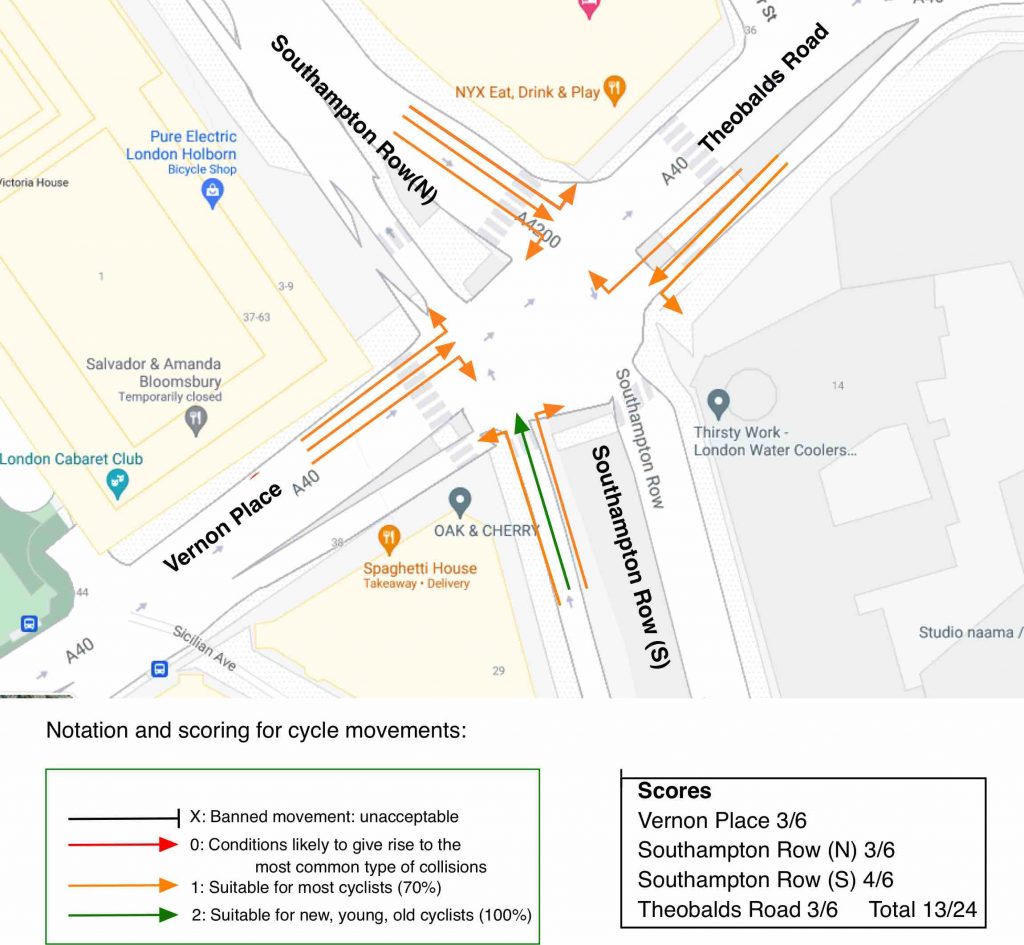 Our new assessment shows that there are no critical fails and no banned turns. But since each manoeuvre involves sharing a bus lane, the scores are all amber except 1, with a total of 13/24.  See the Appendix for details of the calculations.

ASL boxes with early release on the Vernon Place and Southampton Row (S) arms: early release enable cycles already in the ASL box to cross the junction without interaction with the motor vehicles behind them.  But it does not help cycles arriving while the signal is on green; for these roads with heavy traffic flows (>5000 per day) we would suggest an amber score for the crossing of the junction. But we have to consider arrival as well.

Full-time bus lanes on Southampton Row (S) and on Theobalds Road: these will improve arrival conditions – it is better to share only with buses and taxis but not as good as a cycle lane.

Widened pedestrian crossing on Vernon Place with cyclists to be allowed to turn left from Southampton Row into Vernon Place: allowing the left turn is good.

Summary and Comments on the Assessment

We believe that this is a very good effort. It removes all the critical failures and all of the banned turns for cycles and provides a junction that will be acceptable to 70% of cyclists in a context where the surrounding roads are, if anything, worse than that. For example, westbound cyclists on Theobalds Road must cross the left turning lane at Procter Street to get into the contraflow bus lane. See this satellite view.

Two-stage right turns: these provide a safe solution for anyone who can’t manage the right turn due to the conflicts they encounter while crossing the junction – mostly due to arriving when the signal is already on green. They are commonly used especially on the TfL cycleways.

Why not have dedicated cycle stages on all arms? This would get everyone safely across the junction without the need for two-stage right turns.  But it is very likely that they would not be passed by TfL. The consultation says: “Please note: the designs are still subject to approval with Transport for London based on the outcome of traffic modelling”.

Gyratory removal is the key to further improvements

In 2019, Camden won funding from TfL for a Liveable Neighbourhood for Holborn which would enable them to remove the gyratory and make much better use of the surrounding streets. But the funding was frozen last year (2020) and has not been released. See our report.

For example with the Holborn Liveable Neighbourhood:

The current scheme is compatible with this longer-term vision and implements some of the planned measures, for example:

When the Liveable Neighbourhood is implemented, we would expect to see protected cycle lanes and dedicated cycle stages on all four arms of the junction.

Appendix: How we calculated the JAT scores 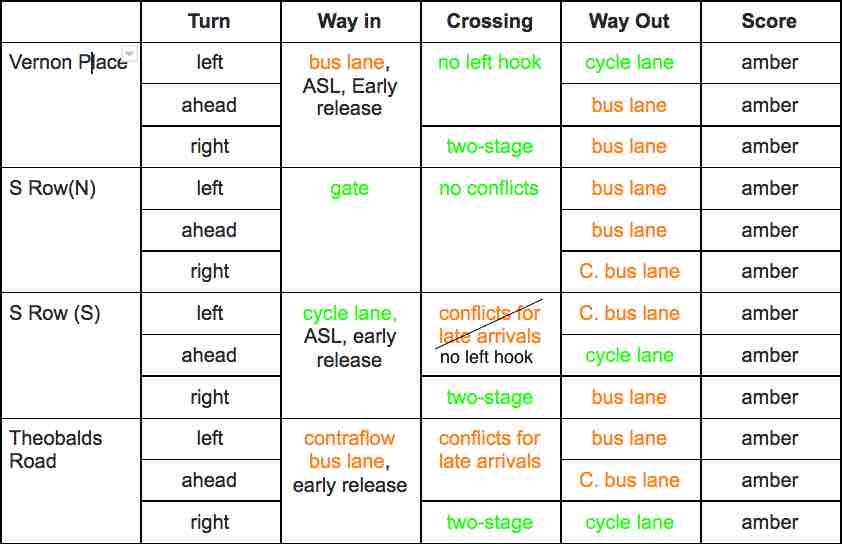 This table shows our assessments for the three stages of each of the turns from each of the arms of the junction. We use the ‘weakest link’ strategy, so that if a turn has two greens and an amber, then the result is amber. It was tempting to give a higher score to the turns from the gate on Southampton Row (N) because any cyclist arriving in a bus lane would be ahead of the motor vehicles; but as they wouldn’t be far behind we decided to stick with amber.

Correction (18.11.21): Stefano Bertolotto has  pointed out that on Southampton Row (S) there are no “conflicts for late arrivals” as there are no left or right turns into Vernon Place. Therefore the ahead movement should be awarded a green score.