Home / News / Talk by Sam Margolis at our AGM

Talk by Sam Margolis at our AGM

Sam introduced his talk by noting that the CTS contains a target to increase the cycling modal share from 4% in 2019 to 15% by 2041 and that the key interventions for achieving this are:

Small schemes such as cycle parking and bike hangars and permeability measures as well as school streets are also important.

Sam used maps and charts developed by Camden Cyclists to illustrate his talk. Our set of maps is described here.

Number of Kms of protected Cycle routes in relation to the introduction of the CTS in April 2019. This increased from 8k to 24k and the spatial layout is illustrated on the maps 1 and 2. 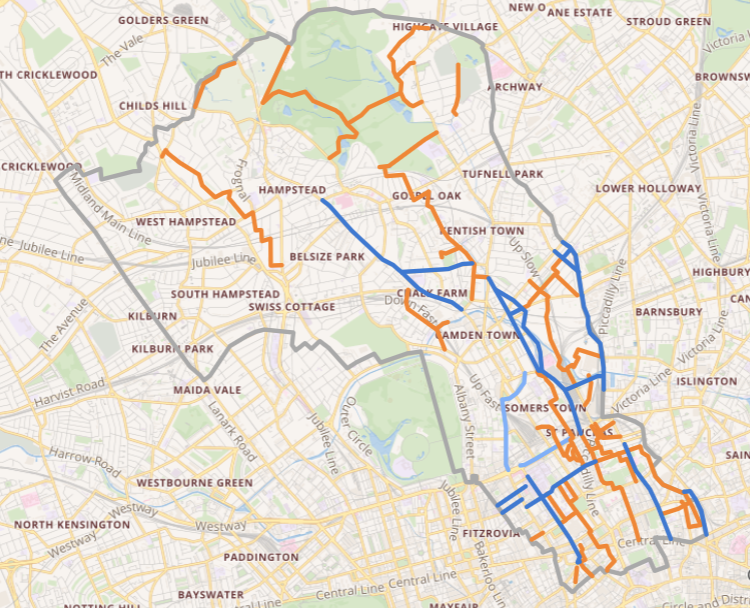 2. May 2022 including Haverstock Hill which is under construction 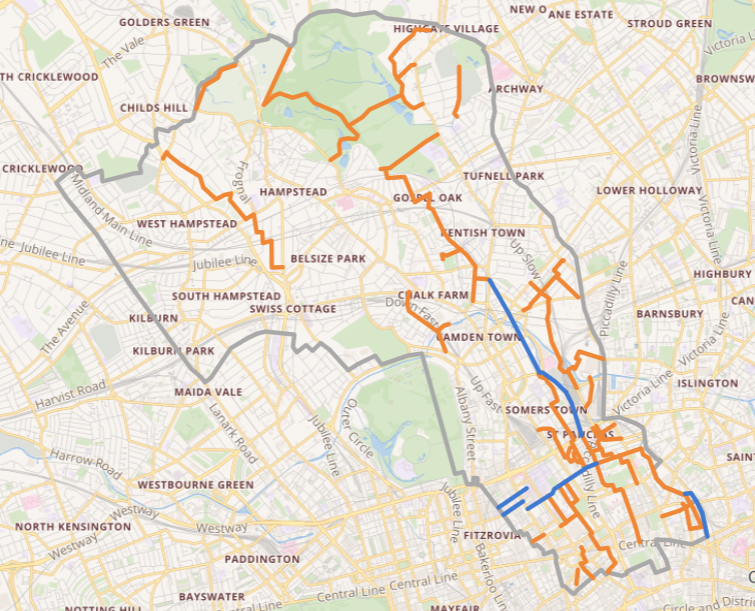 The primary protected routes are shown in blue and the secondary route in red-orange.

Our map is here and will change over time as the network develops. 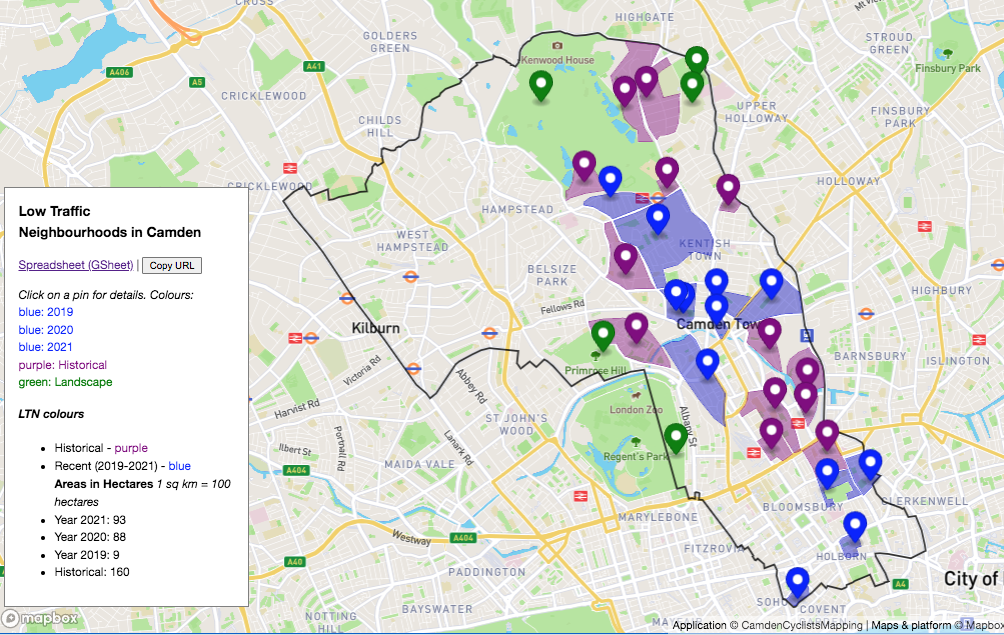 3. Map illustrating the development of LTNs

Sam also gave statistics for Healthy School Streets, which have increased from 3 to 24 over the period since the introduction of the CTS

The number of point closures in relation to the introduction of the CTS has increased from 86 to 116.

Major junction upgrades:  26. This includes the almost complete upgrade at the junction of Southampton Row and Theobalds Road where a cyclist was killed in August 2019 (cost > £1/2 million).  Sam also mentioned the just completed upgrade to the junction of Agar Grove and St Pancras Way – the first in the borough to have a separate cycle signal on all four arms.

Author’s Note: Other junctions in Camden with a separate cycle signal on two arms include the C6 crossings over Camden Road and over Euston Road both pre-2019; as well as the two new junctions on Gray’s Inn Road built in 2021. This could be the next data set for Camden Cyclists to study.

Sam showed us the effect of these new schemes in terms of the increase in cycle counts and the use of dockless hire bikes. On the new protected cycle routes, the increases in cycle counts were impressive e.g. between 70% on Chalk Farm Road and 200% on St Pancras Way.

Other benefits were lower levels of air pollution measures and a decrease in motor traffic. For example, in the Queen’s Crescent LTN there was a 33% reduction of motor traffic on local roads, and a 12% reduction on the main roads.

He also introduced us to a measure called ‘Benefit-Cost ratio’ or BCR – the gain from building a project against the cost to build it. E.g. for the Chalk Farm Road scheme, BCR of 6:1 – for every £1 of investment, over £6 in benefits accrued which is “very high”.

Plans for the next three years

Sam told us that the Cycling Action plan is being updated and that the expansion of the cycle network will continue as well as the upgrades to the pop-up routes which are now permanent, together with new LTNs and more of all of the smaller schemes including school streets, bike hangars, permeability and training.

Susan Seymour: asked about connections with other boroughs. Sam: Camden is working with Westminster e.g. on Seven Dials and with Islington e.g. on York Way and is encouraging them to build infrastructure on Market Road.

Elena Moynihan: Hampstead Town – the maps shops nothing has been done. Sam: Camden is working out from the centre and Haverstock Hill is getting nearer. As funding is limited, priorities are determined from heat maps showing factors such as pollution, car use, public transport access and deprivation.

Jon Stone: asked about routes and LTNs in the west of the borough. Sam discussed the N-S roads (parts of West End Lane are too narrow for cycle infra, Finchley Road is TfL’s and Camden is developing a scheme on Kilburn High Road).  A variation on the Q3 route will be go with the ‘Gardens’ area LTN (i.e. including Broadhurst Gardens, Fairhazel Gardens etc).

Steve Prowse: I would like to see all cycle lanes with double yellows and no waiting blips. Sam: agreed that legacy bike lanes (with no wands) this is an issue.

Simon Pearson: bemoaned the fact that as soon as he and the other Swiss Cottage councillors were elected, the CS11 scheme was dropped and that they had supported the LTN scheme for King Henry’s Road which was radically diluted and had asked for an LTN for the Gardens area which has not yet materialised. Sam: sorry for the failure but the Gardens scheme is under study; King Henry’s Road was ‘challenging’ and Swiss Cottage depends on TfL.

Steven Edwards: noted that objective 2 of the CTS is to reduce car ownership and use and asked why the Prince of Wales Road westbound track is behind parked cars. Sam: Camden took out 46 parking spaces when the eastbound track was built and decided to leave the others.

J-F Paris: Why is it that people are able to park Electric vehicles in Westminster without charge. Sam: referred to a report on comparisons of charges throughout inner London. We need a link

Paul Allen: asked about cycle lanes with single yellow lines such as Prince Albert Road and Malden Road which gives a bad impression of cycle lanes. Sam: they are historic and we wouldn’t do it that way now and many of the problems are with the CPZ in the area leaving the single yellow lines open for parking.

This talk was very much appreciated by those present and particularly Sam’s patience in dealing with our questions. We all know from using the cycle routes and crossing the LTNs how much Camden has improved for cycling but it was very good to see this presented to us and the benefits measured.