We show how over 2 kms of good quality cycle route has been created from the Camden Square low-traffic neighbourhood, two-way cycling in Randolph Street and several upgraded junctions.

In Summer 2018, TfL called us to a meeting about a planned cycle route from Camden to Tottenham Hale called ‘Cycle Future Route 2’. The original idea had protected cycle lanes on both sides of Camden Road but at that time they planned for the Camden and Islington sections to run northbound on Camden Road and southbound on a parallel route that goes through Camden Square. But early in 2020, TfL changed their mind about giving space for cycling on Camden Road and said that the route should go through Camden Square in both directions. When TfL rationalised the cycle route names last year they called it C50.

During 2021 Camden Council consulted on a scheme that includes a Low Traffic Neighbourhood (LTN) for Camden Square and a set of improvements on the C50 alignment – mainly at junctions. This post is about how the LTN and junction improvements have produced a significant upgrade to what was already a useful cycle route.

There have been negative comments about using a meandering route around Camden Square rather than a more direct route on Camden Road. We have measured the C50 route shown on Map 1 below  (1.19 km) and compared it with the distance along Camden Road and down C6 to the junction with C50 (1.08 km).  The new scheme provides two-way cycling on Randolph Street so the difference is very small. Quite apart from that, the Camden Square route avoids noise and air pollution and provides a green and pleasant environment. 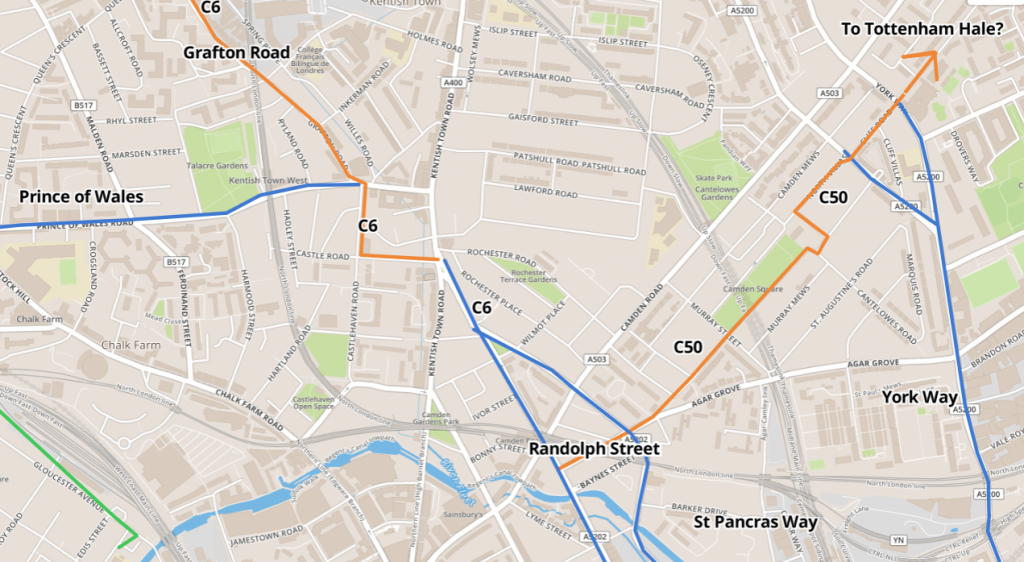 Map 1: context of the C50 route: protected links on busy roads in blue and links on quiet roads in red-orange

This new Low Traffic Neighbourhood (shown in pale blue on Map 2) came into being in December 2021. 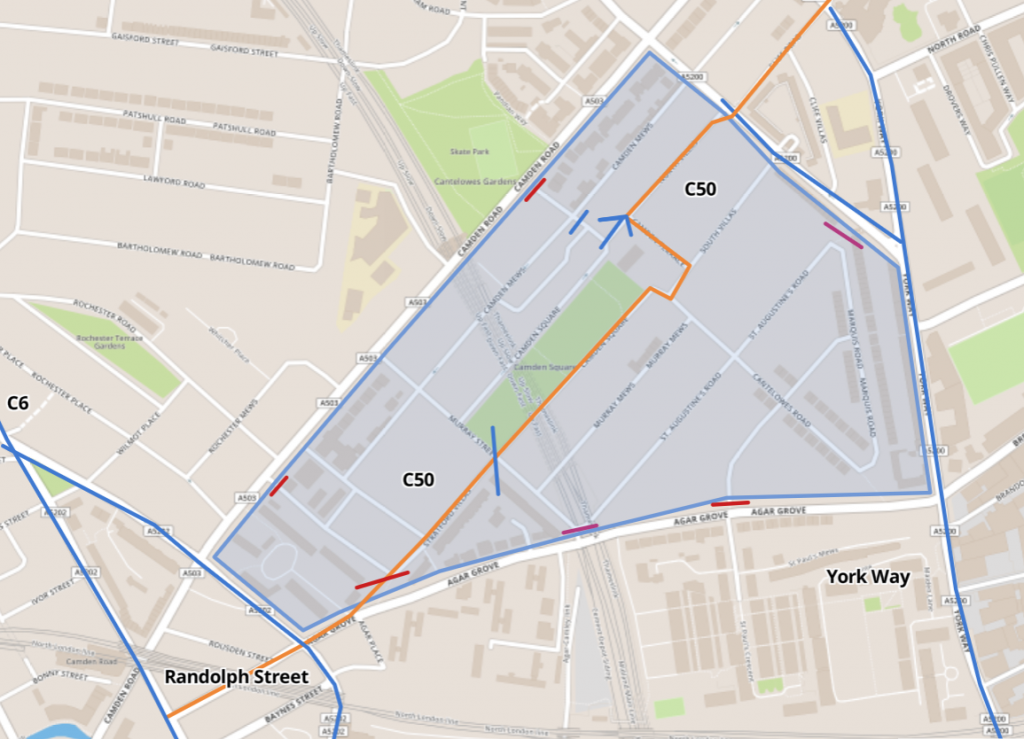 Map 2: Camden Square LTN covers the light blue area; the historical filters are shown in red and the new filters in blue.

The Camden Square area has been fairly well protected from through motor traffic since filters were installed in the 1970s, closing all of the Agar Grove junctions apart from Murray Street as well as two junctions with Camden Road and another with Camden Park Road (red filters on Map 2). The most serious rat-run was through Murray Street between Camden Road and Agar Grove, particularly by drivers wanting to turn right from Camden Road to reach York Way.  This has been cut out by a new diagonal filter across Murray Street at its junction with Stratford Villas and Camden Square (blue line). An additional one-way northbound filter and right turn ban (blue arrow at the bottom of North Villas) prevents drivers entering Murray Street from Camden Road from reaching Camden Park Road and from circling around Camden Square and back to Agar Grove. Another nearby filter prevents all but local traffic from entering Camden Mews from Cantelowes Road. Photo 1 shows the view of the diagonal filter from Stratford Villas: cyclists can go straight on across the filter while motor vehicles have to turn left. Motor vehicles on Murray Street (on the left of the photo) have to give way and then turn right.

Photo 2 shows the view of the diagonal filter from Camden Square (east side): cyclists can go straight on across the filter while motor vehicles have to turn left. Motor vehicles on Murray Street (on the left of the photo) have to give way and then turn right.

The filters at the junction of North Villas and Camden Terrace 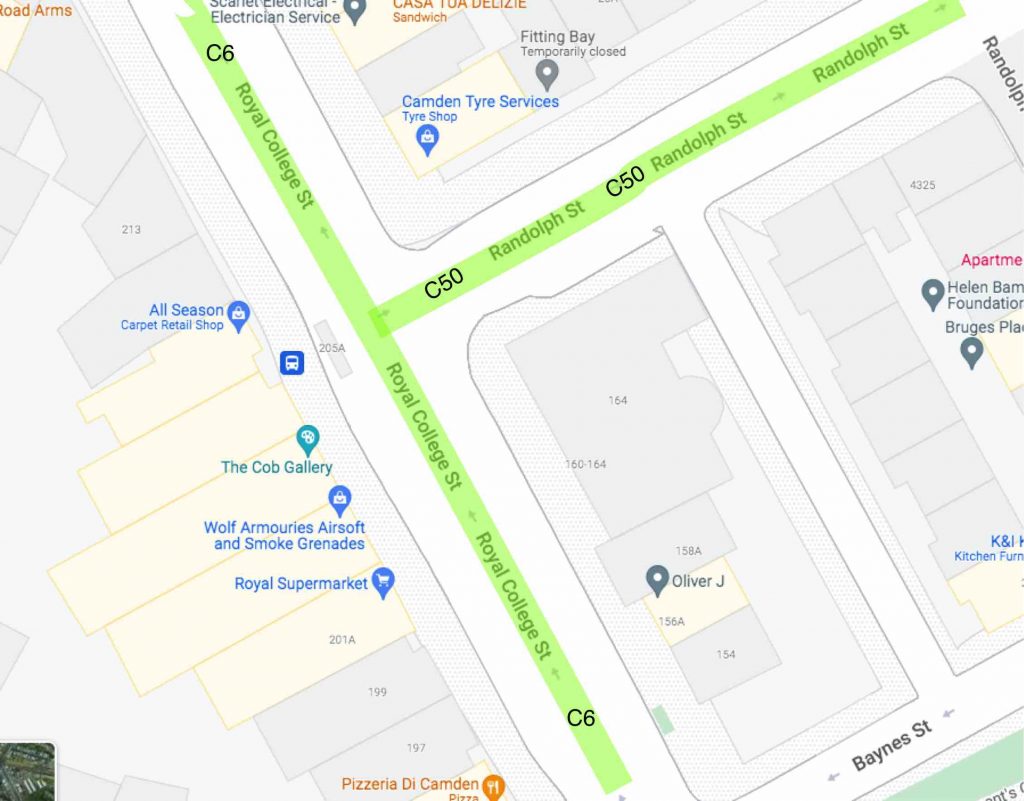 Photo 5: the bus stop bypass with the turning lane in the distance Photo 6 shows the view into Randolph Street seen by someone wanting to turn right. The ‘KEEP CLEAR’ markings are usually effective in making space available for crossing between the northbound cycle track on RCS and Randolph Street.
Photo 7 shows the view from Randolph Road across Royal College Street. Frequent users of this route will note that the pesky black bin is still lurking in front of the bus stop even though the latter has been moved down the road. Photo 8: on St Pancras Way facing south with Agar Grove on the left 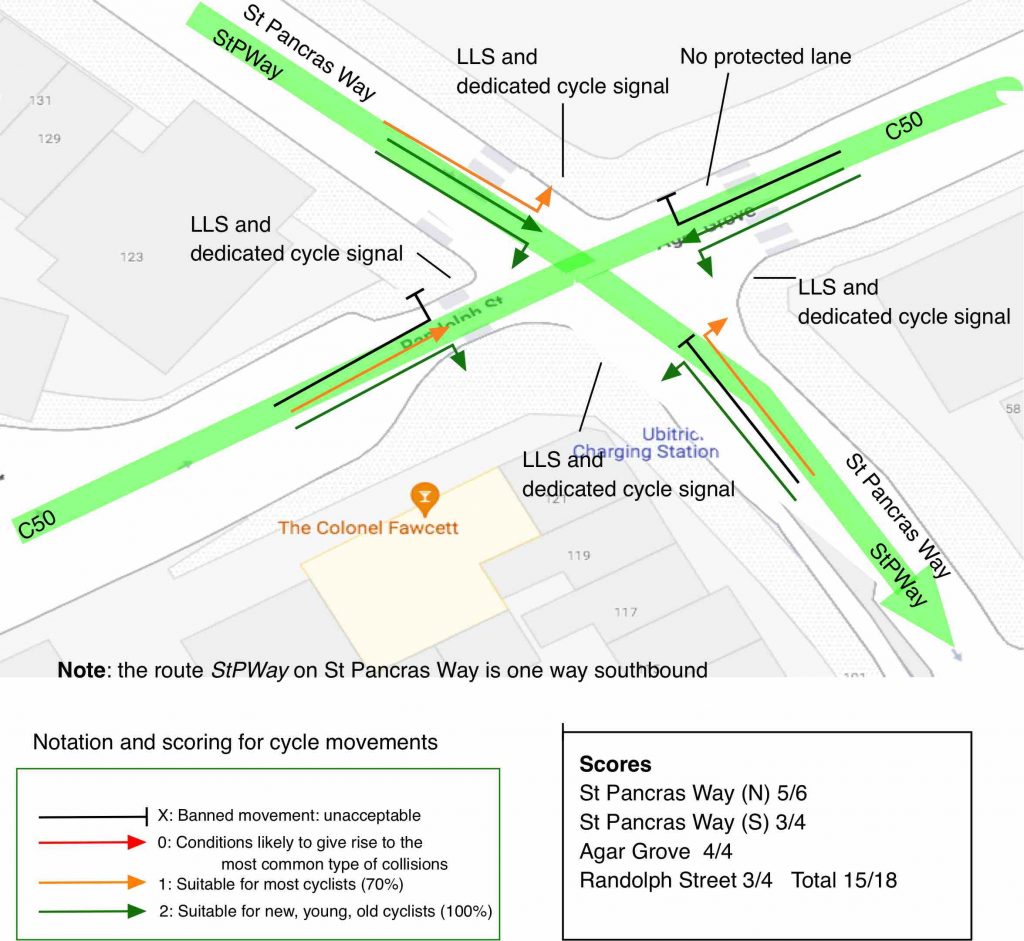 This junction has dedicated cycle signals on all four arms – the first one in Camden as far as we know.

There are radical changes here:

We have awarded it a JAT† score of 15/18 . The score is out of 18 (rather than 24) because St Pancras Way is one-way southbound and therefore it’s not possible to turn north from any of the other three arms. 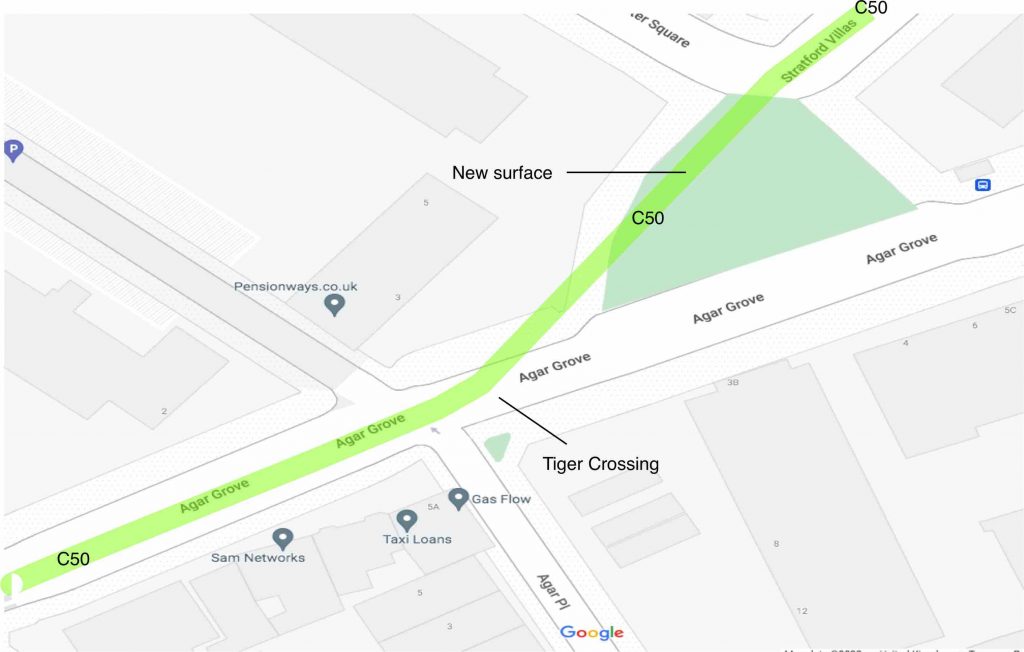 There has been a cycle track through the road closure for as long as we can remember but it had become rather bumpy due to the emergence of tree roots. This is now beautifully smooth but hadn’t yet been lined at the time of writing.
Photo 9 shows the new Tiger Crossing provided for southbound cycles to cross Agar Grove more easily.
Note: there is no protected cycle infrastructure on the north side of Agar Grove between St Pancras Way and Stratford Villas.
. 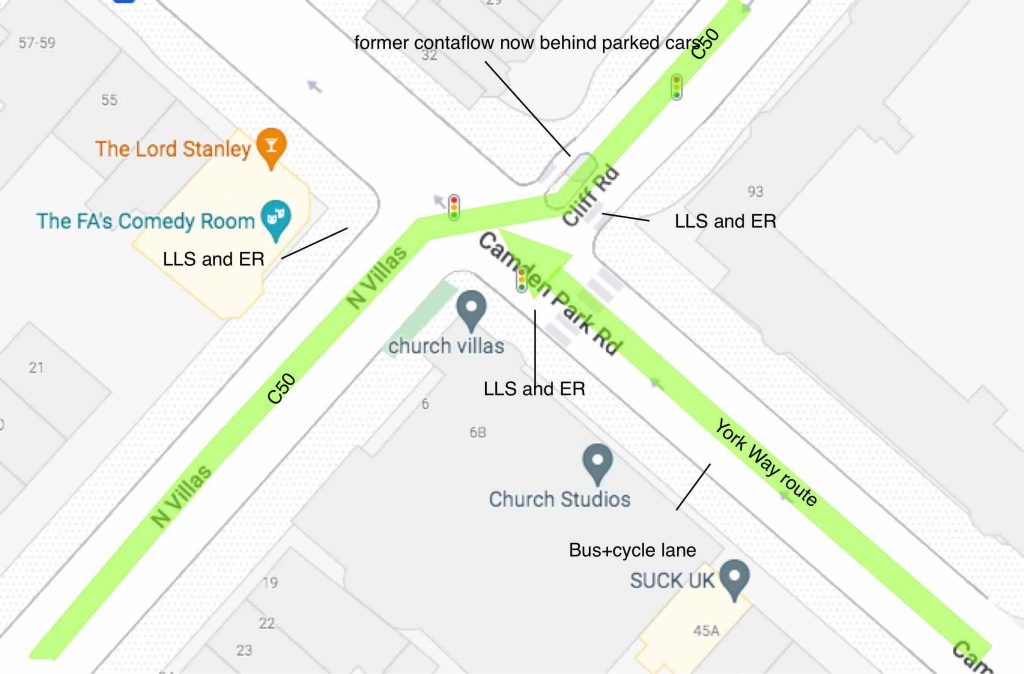 Cliff Road is one-way westbound for motor vehicles but carries very little motor traffic. The new contraflow lane is behind the parked cars. 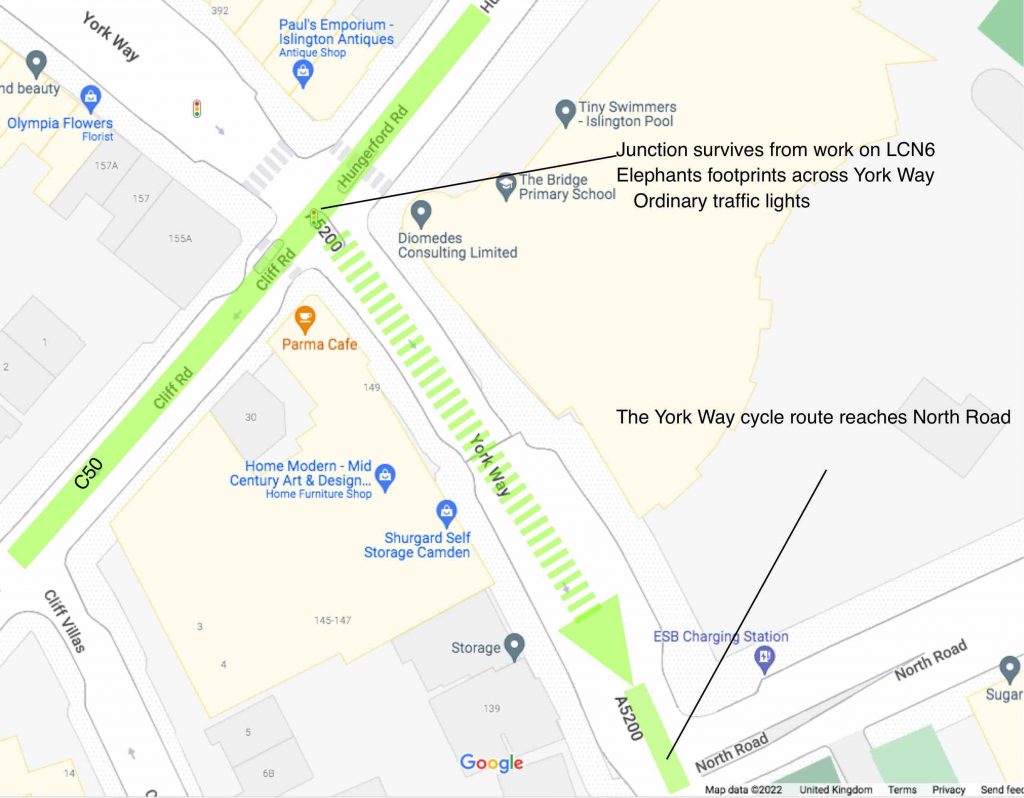 The designs for the agreed permanent scheme for the York Way cycle route show the infrastructure being extended from Hungerford Road down to North Way. They also include notes on altering the layout of the motor lanes.

We, therefore, look forward to seeing some improvements in this area in the near future.

We would very much welcome input on how to measure the safety of junctions without signals.