The implementation of the scheme was completed in June 2016

There are stepped tracks on both sides of the road; separate cycle signals for crossing Camden Road and an experimental narrow section to enable people to cycle southbound past the junction with St Pancras Way. 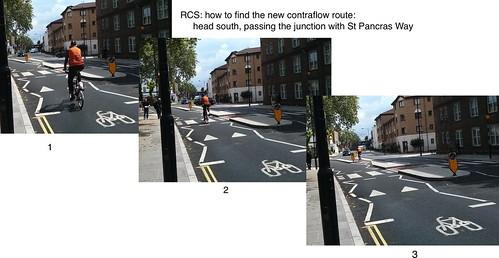 The pity is that this mainly excellent scheme has been marred by the loading bay on the NB route and that ‘hours of operation’ have not yet been posted (19 June 2016), nor are there any dropped kerbs to get on and off the track.

We will carry out an ‘informal audit’ towards the end of June.

The scheme implemented was modified due to the problems described below. The changes are mostly for the best. But Camden Council agreed to install an off-peak loading bay on the NB route – we were against this but stated that there must be a way to cycle down and up again when the bay is occupied.

Camden Council consulted on the northern extension in September and October 2014. See our discussion on CycleScape

The main issues for further discussion :

At this junction, southbound cycles in a nearside lane need to continue straight down RCS while motors turn left down St Pancras Way.  The aim was to find a solution in which

Camden proposed a succession of possible solutions which are discussed in detail in our report on Junction St Pancras Way-RCS.

Opposition from local groups led to the following further issues being raised:

Cllr Jones approved the scheme on 16th December 2014. Read about the deputations and the result in our news post.