During 2020, the length of protected cycle lanes almost trebled; we made 15-20 permeability gains; the first LTN and 17 other useful road closures appeared as well as a dozen school streets and 70 new bikehangars.

Several of the schemes we mention were already under construction last year. But the new Covid-19 StreetSpace funding together with simplified consultation has led to an unforeseen increase in provision for cycling during 2020. The most important improvement in Camden was the rapid expansion of the proposed borough-wide cycle network based on pop-up cycle lanes. The pop-ups are mandatory cycle lanes protected by flexible bollards.  In many cases, the road width does not allow for bus stop bypasses  – for this situation, a standard called SUBB (shared use bus boarder) was devised. The two maps above show the protected cycle lanes in purple and the boundary of Camden in black. The two blue lines are on Gray’s Inn Road where a pre-Covid scheme is under construction and Chalk Farm Road– Haverstock Hill where pop-up cycle lanes are under construction.  These are extracts from our map that shows protected cycle routes in Camden in the context of other routes on quiet roads. This is a long-standing campaign that refers mainly to the introduction of two-way cycling in one-way streets but also includes cycle gaps/dropped kerbs through road closures. Here is the list of the gains for 2020: The Arlington Road area LTN opened in late September. It is about 1 km long and 0.3 km wide – an area of about 0.3 km2.  After its being in place for a couple of months, Camden has consulted on some improvements. 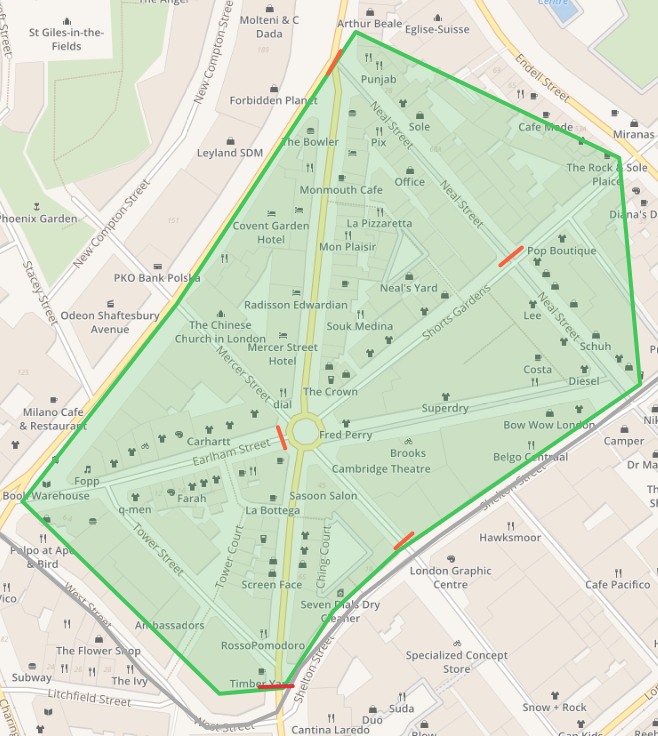 The Seven Dials LTN is tiny: about 0.04 km2 in area. Through motor traffic has been excluded in the day time with a full closure on Monmouth Street between Tower Street and Shelton Street. The details are here. During 2020, Camden has implemented 8 other road closures, some of them resulting in mini-LTNs and many of them improving conditions for cycling on a so-called quiet route and one of them enables two-way cycling.

In May, point filters based on bollards appeared in five streets:

We have already mentioned two-way cycling in Laystall Street (north): this was made possible by a point closure shown in a photo above.

Finally, the magnificent scheme to restore Brunswick Square to its former glory was achieved by the removal of the roundabout and the closure of Lansdowne Terrace to motor vehicles. Brunswick Square with Lansdowne Terrace on the right These changes, as do the changes in Red Lion Street, enhance the north-south cycle and walking route from Kings Cross to Holborn.

The closure of Lansdowne Terrace should also further reduce motor traffic on Judd Street that was closed at Euston Road to complete the C6 route. This page shows Camden’s map of bikehangar locations: the provision has been increased by about 70 during 2020, some of which may not yet be in place.

Some car parking bays have been re-allocated for Car Bike Ports and many others for use by dockless hire bikes.