This new route was completed in October, adding almost 2.5km of protected cycle lanes to the network in Camden. The lanes are protected by bollards except opposite the bus stops where stepped tracks are used. It plays an important role in the cycle network. 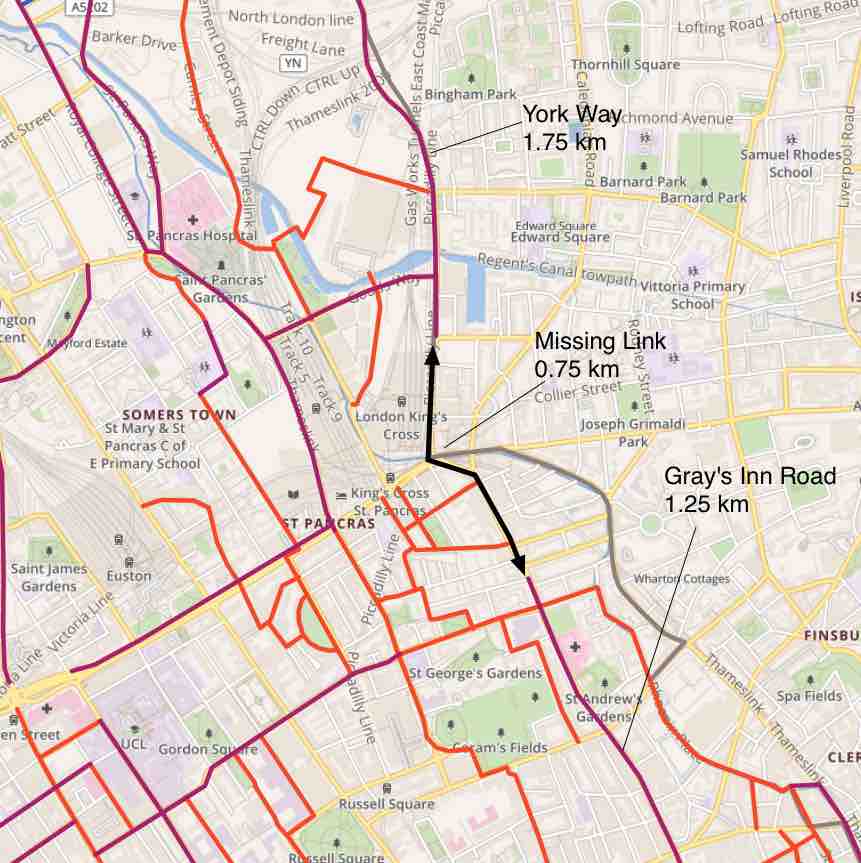 The newly completed cycle route on Gray’s Inn Road runs between Harrison Street and High Holborn, providing about one and a quarter kms of protected cycle lanes on each side of the road. The junctions at Sidmouth–Ampton Street and at Guilford–Calthorpe Street have been upgraded. Seven new bus stop bypasses have been constructed together with a few Tiger crossings to aid with access to and from small side roads. Continuous footways have been constructed across some of the side road junctions.

It can’t be fed directly from the north due to the gap between the northern end of this route and the southern end of the route on York Way.  But it is a very useful north-south route that connects with numerous small side streets as well as the routes at the two junctions mentioned above.

The missing link: The map shows the southern end of the York Way cycle route and the northern end of the route on Gray’s Inn Road. The gap between them is only 3/4 km but is hard to bridge because it is on a northern route through the King’s Cross gyratory. Any alternative route e.g. via Goodsway and Cycleway 6 is much longer. What is needed is for space in the roads approaching Euston Road to be re-allocated to cycling and the junctions to be upgraded accordingly. Ideally, there should be a direct crossing over Euston Road of a similar standard to the Midland – Judd crossing.

The result of bridging this gap would be a continuous route of almost 4 kms in length. The mandatory cycle lanes run on both sides of Gray’s Inn Road throughout the route and are 2m wide except where the road is too narrow and a little wider when more space is available.

Some short sections opposite the bus stop bypasses are implemented as ‘stepped tracks’ to give more protection at locations where the road is very narrow.  A stepped track is a cycle lane at a height midway between road and footway – see the photo.

On the remainder of the route, the cycle lanes are protected by flexible bollards.

No loading/waiting or parking is allowed anywhere on the route which is marked with double yellow lines and double blips. These are marked outside the stepped track or outside the footway kerb when bollards are in use (see below). Cyclists needing to join a cycle lane between junctions can use this difference as a hint as to whether there is a height difference. Side-road junctions: these refer to the many junctions without signals, all of which connect to roads with low traffic. Continuous footways have been built across some of the side-road junctions: this not only emphasises pedestrian priority but also protects the cycle lane passing the junction.

At other side-road junctions, the cycle lane is marked with logos.

Two of the four signalised junctions on Gray’s Inn Road south of Harrison Street have been re-designed to provide a safe route through for cyclists in all directions. The dedicated cycle signal allows cycles on Ampton Street and Sidmouth Street to use the junction without interaction with any motor traffic. This enables them to make all manoeuvres including right turns.

The provision of early release for north-south cycles is a compromise: right turns can be done in two stages – and places for waiting have been marked in front of the cycle stop lines in Ampton Street and Sidmouth Street.

Northbound cyclists on Gray’s Inn Road are at risk of left hook from motor vehicles unless they arrive at the junction while the signal is on red. The dedicated cycle signals on Gray’s Inn Road enable cyclists to make all manoeuvres including right turns without interaction with motor traffic.

The motor traffic levels on Guildford Street and Calthorpe Street make it very difficult for cyclists on these roads to perform right turns at this junction. And there is no space provided for two-stage right turns.

In addition, there are risks of left hooks for cyclists who arrive while the signals are on green. So our conclusion is that although an improvement, early release isn’t good enough here.

At the two old junctions, nothing has been done to improve conditions for cyclists. The new cycle lanes on Gray’s Inn Road stop about 15m from the junction leaving only the old infrastructure (e.g. just an ASL box). The consultation (2019) mentioned upgrading this junction as part of the Holborn Liveable Neighbourhood project but the funding awarded in 2019 was frozen last year (2020) and has not been released. The route along Theobalds Road – Clerkenwell Road is part of the cycle route named Clerkenwell Boulevard and has carried very large numbers of cyclists for many years. This junction urgently needs an upgrade and has done for many years.

The introduction of the new route on Gray’s Inn Road adds urgency to the need to bring this junction up to the standards required in LTN 1/20. We therefore hope that TfL can be persuaded to release funding without delay.

The photo illustrates just how inconvenient and threatening this is for cyclists approaching in safe cycle lanes. At the moment there is no cycle infrastructure on High Holborn although it is a proposed primary route in Camden’s Cycling Action Plan – currently targeted for 2041 but should be achievable by 2030 considering the recent acceleration of progress in building the cycle network.

The photo shows the lack of anywhere to go for cyclists who arrive via safe cycle lanes with their own reserved road space. The only way to make any progress would be to use the wrong side of the road and pass on the right of the motor vehicles.

Considering that the new infrastructure on Gray’s Inn Road will attract cyclists to this T- junction, it is important to join it to the new cycle lanes and make all of the possible manoeuvres totally safe for cyclists as well as improving the convenience e.g. by a free run through the signals westbound along High Holborn (“signal bypass”). Zebra markings are used to warn cyclists that they must give way to pedestrians crossing to and from the island. Whenever possible, the cycle lane is ramped up on the approach to the zebra markings.

The island has to be a minimum of 2.5m wide which takes up extra space in the road which isn’t wide enough to put the bus stops opposite one another. So the locations of five of the eleven existing bus stops were adjusted and the three close to the Theobalds Road junction were removed. But the distance between the bus stops is still less than 400m. Bus stop bypasses have been implemented at all but one stop: the one outside the Calthorpe Community Garden just south of Ampton Street. If a bus is at the stop, the cyclist has a choice of waiting until it goes or riding round the bus.

The cycle lane south of this bus stop runs out round the building works currently taking place at the former Eastman Dental Clinic. The Tiger crossing is like a zebra crossing, but with a separate parallel cycle crossing alongside it. Drivers of motor vehicles must give way to cycles on the crossing as they would to pedestrians.

They are particularly useful when placed close to side streets. E.g. a cyclist from Roger Street wanting to turn right southbound can go a short distance up the northbound track and use the Tiger crossing to go over Gray’s Inn Road and use the southbound track. 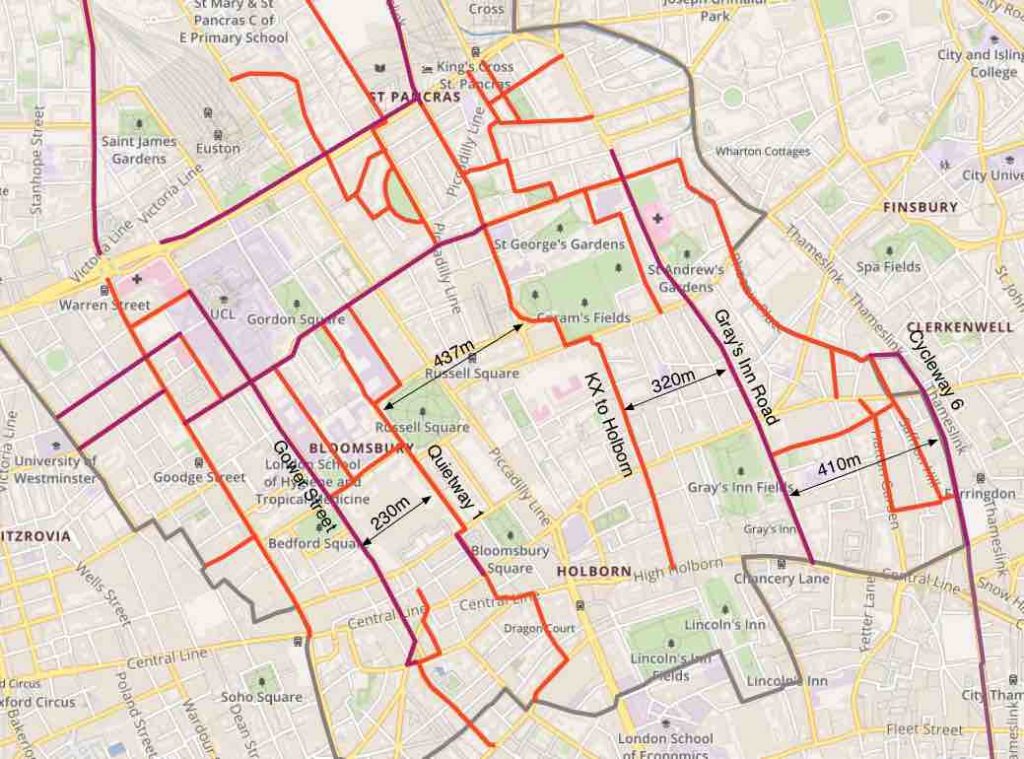 Gray’s Inn Road is about 400m west of Cycleway 6 on Farringdon Road and is about 300m east of the Kings Cross to Holborn route on Lamb’s Conduit Street.

We have for a few years advocated a grid density of 400m and we can see that the new  route on Gray’s Inn Road plays an important part in establishing such a density.

As to east-west routes: Euston Road to Tavistock Place is about 370m but there is nothing south of that. In practice, the following routes are used by many cyclists:

Guilford Street – Calthorpe Street which is about 350m south of Tavistock Place and with some motor traffic reduction could become a secondary route.

This shows the importance of upgrading these routes and the junctions referred to above.