Counts continued to be higher than the previous year until July 2017. Then they levelled off. Low counts coincide with bad weather in Feb and Mar 2018.

The first cycle counter was installed in Royal College Street in mid-April 2014. Each year, we have reported on the counts, comparing one year with the next. 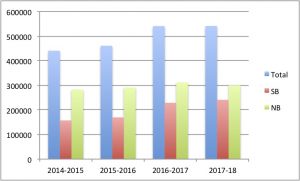 The northern extension of the track to Kentish Town opened in October 2016 and since then, the southbound counts have increased more than the northbound ones. The proportion of northbound cycles is now down to 55% compared to 63% in the first year, so the numbers are now more equal. 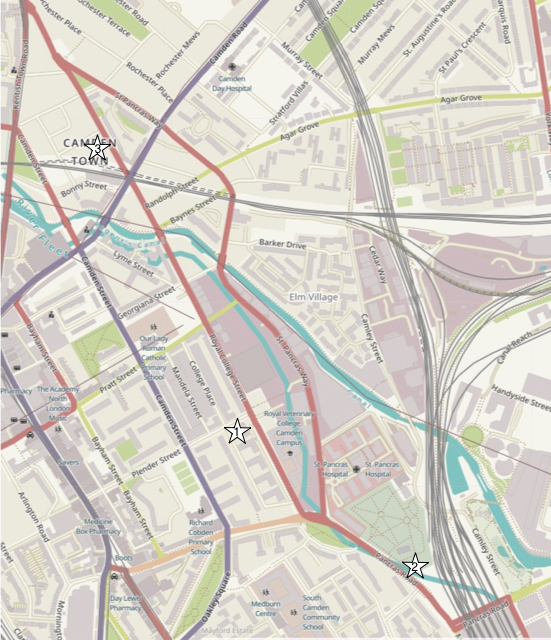 Figure 2 shows the locations of three cycle counters in this area. The data above is from the Royal College Street counter (“RCS-S)” #1 on the map). A second counter(#2) was installed in Pancras Road in September 2015 and a third (#3 ) in Royal College Street, north of Camden Road in August 2017 (“RCS-N”).

Figure 3 compares the data from counters 3 and 1 and shows that the total number of journeys past the northern counter is about 3/4 of the number of journeys past the original counter in Royal College Street, with a slightly higher proportion northbound. Occasional observations of the crossing over Camden Road indicate that the majority of users continue on their north- or southbound route on Royal College Street.  Many people from the east join the route at Georgiana Street while others from the west joint at Pratt Street. 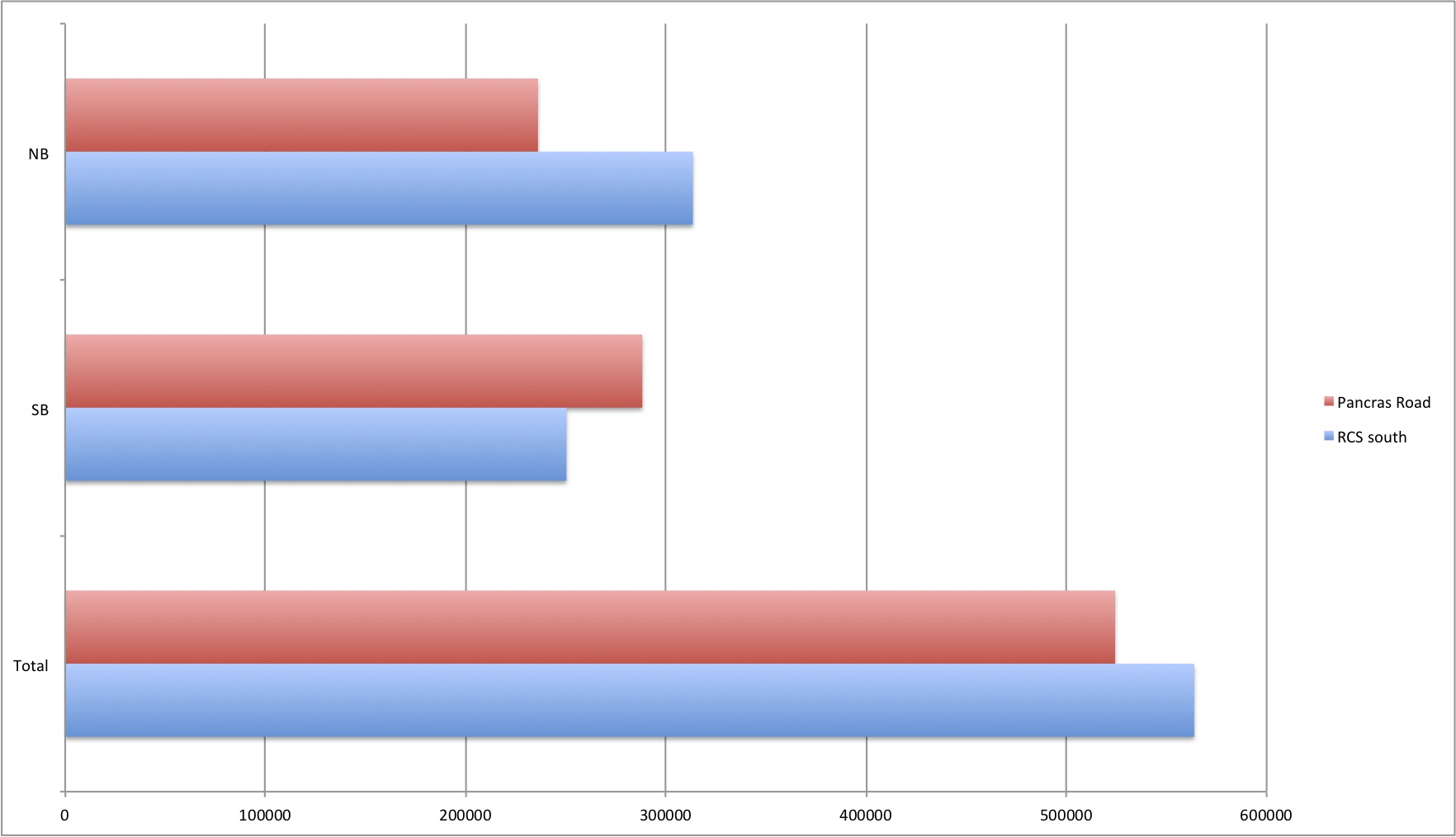 Figure 4 compares the counts at counters 2 and 1 for the period 20 Feb 2017 to 19 Feb 2018 – we were forced to use this earlier period as counts on Pancras Road between mid-February and the end of June 2018 appear to be faulty.

Currently, Pancras Way is used to link to the east via Goodsway but when the two-way cycling infrastructure is built in Midland Road with the crossing over Euston Road to Judd Street, it is likely to become the much more popular.

Northbound journeys? Northbound journey numbers on Pancras Road are about 75% of those on RCS.  But we know that many other journeys come via the Somerstown route. It would be interesting to find out more about what happens at the Crowndale Road junction.

Figure 5 compares monthly counts for the first four years. The mauve line represents the period 1st May 2017 – 30th April 2018.  The green line represents the previous year. The counts at the beginning of the fourth year (May to July 2017) show a considerable increase in numbers over the previous year  (on average a 23% increase). This is a continuation of the increase observed after the opening of the RCS northern extension in mid-July 2016. After a level period in the winter, the figures for February and March this year dropped well below those for last year.

The big difference in February and March could be attributed to the weather: according to the NW3 Weather Station there was very cold weather at the end of February and 50% more rainfall than average in March. By April, the 2018 count was approaching that of the year before.

Royal College Street – weekly data show continuing increases up to last July, then a leveling followed by a drop in February and March during bad weather 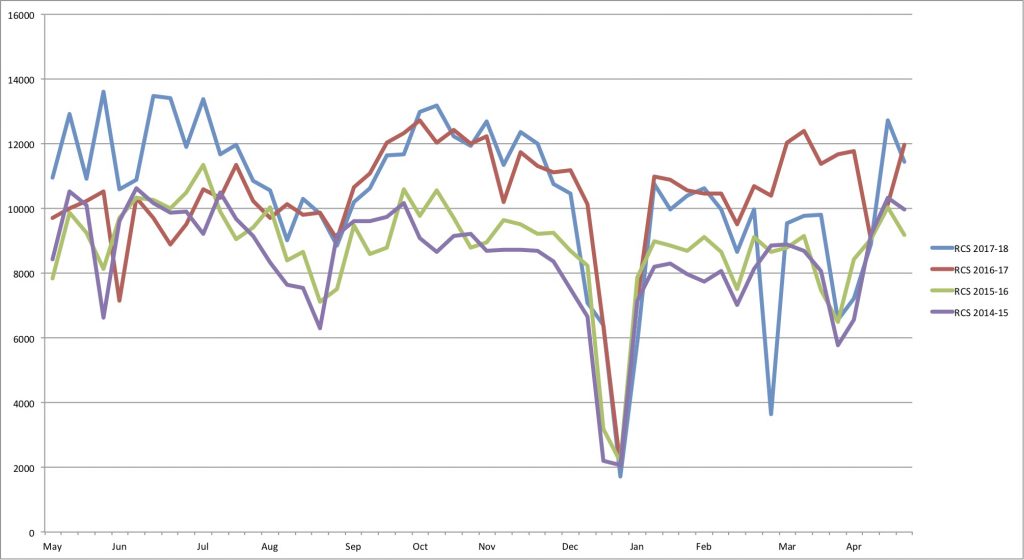 Figure 6 compares counts over the entire week including weekends with the blue line representing the period 1st May 2017 – 30th April 2018 and the red line the previous year. During May, June and July 2017, the weekly counts continue to exceed those of the previous years, with an all-time weekly maximum of 13610 in the last week of May 2017.

From September 2017 until February 2018,  the weekly counts for the two years are almost identical. 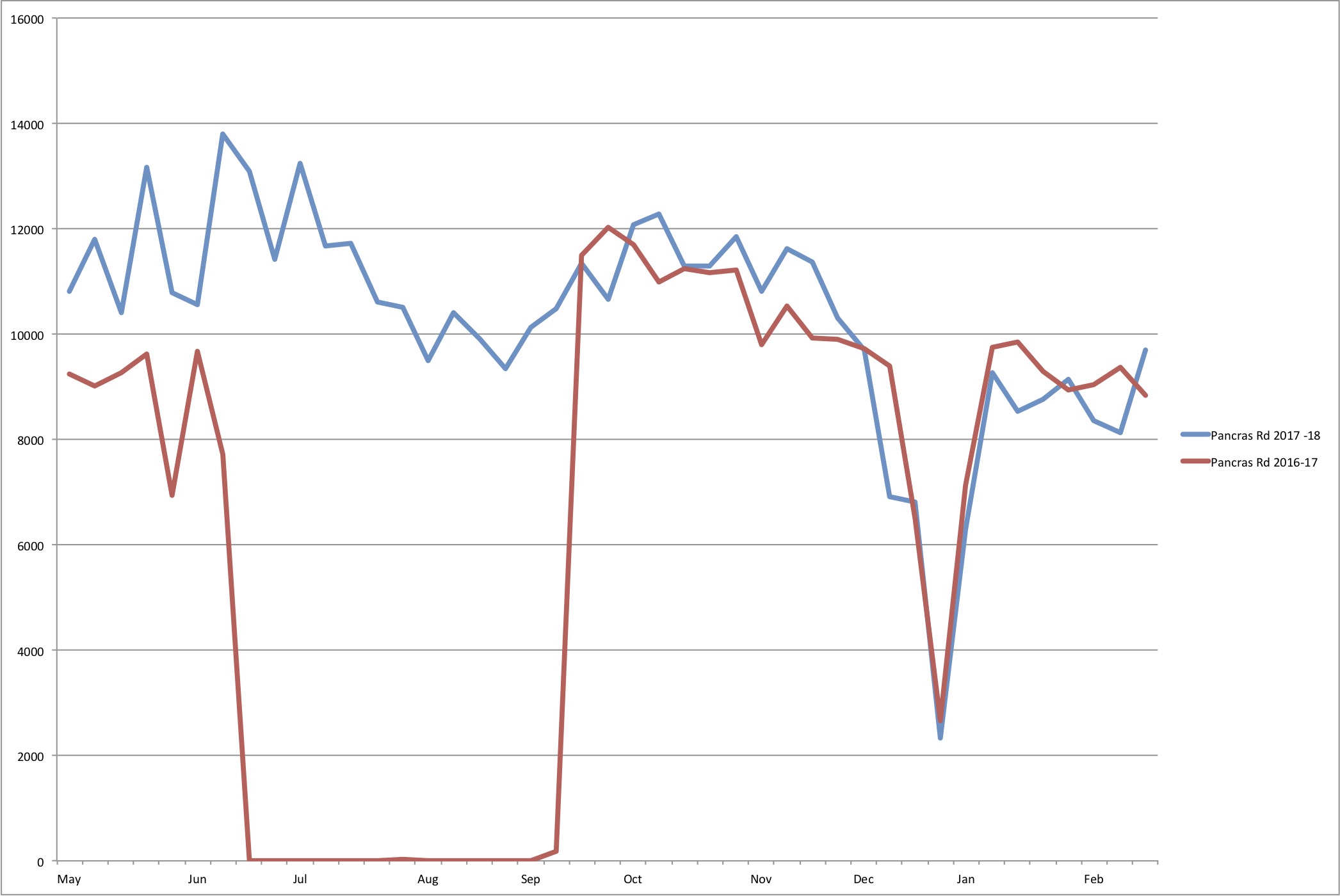 Does the Pancras Road data confirm the leveling off? Figure 7 compares counts over the entire week with the blue line representing the period 1st May 2017 – 19th Feb 2018 and the red line the previous year. (The data from March to June 2018 appears to be implausible and we feel unable to use it).  In addition, the data in our comparison is incomplete because this counter was out of service from 18th June 2016- 18th September 2016. However, we can see the same levelling off from last September onwards.

Royal College Street dips: As usual, counts dropped in August and again around Christmas and New Year with an all-time minimum of 1717 cycle journeys in the week starting Monday 25th December 2017.

The weekly figures allow us to look more closely at the above drop in numbers during February and March 2018. We will look at the lowest weekly counts (i.e. those below 9000): 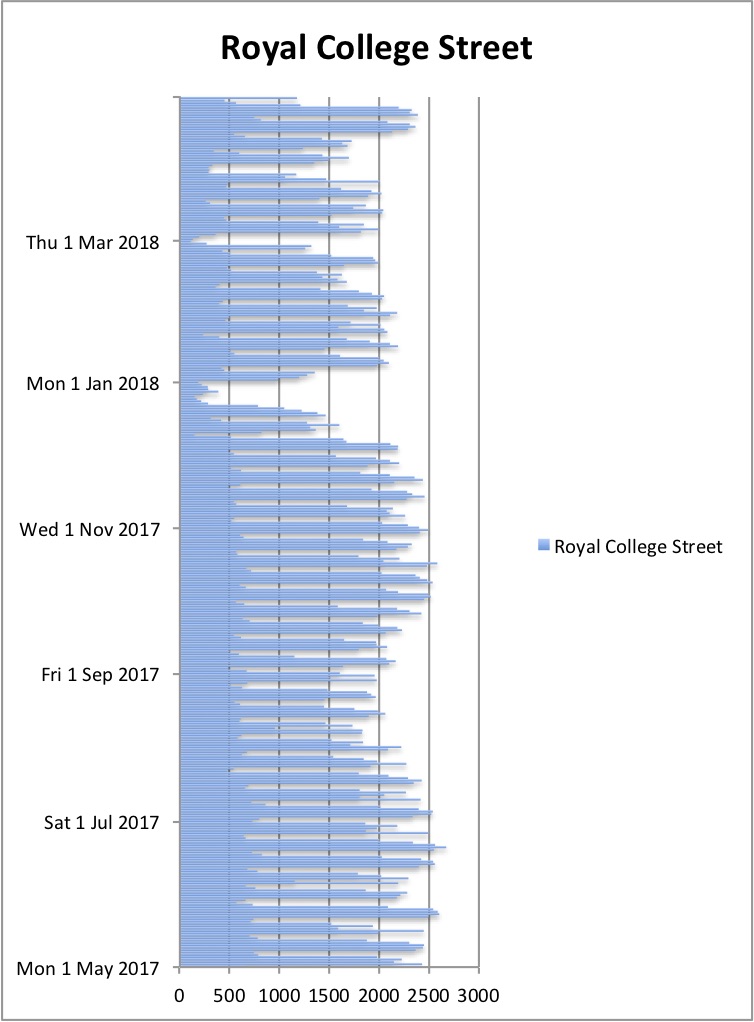 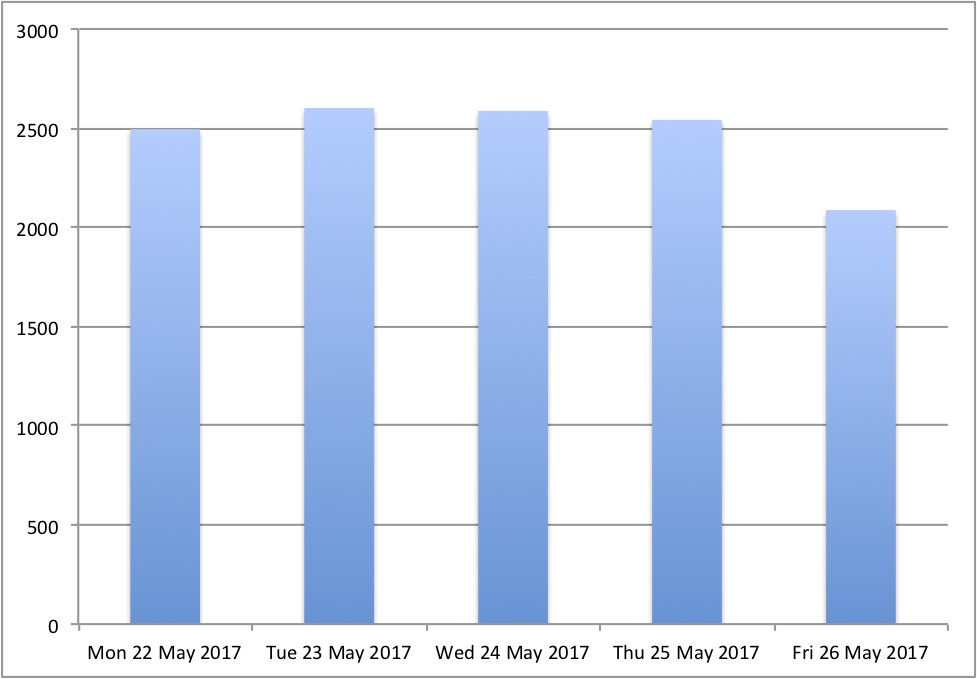 This website displays yesterday’s counts on the Home page. In spite of some poor figures in March, we have continued to notice that weekday counts are regularly exceeding 2000. This occurred on 120 weekdays in the period studied. 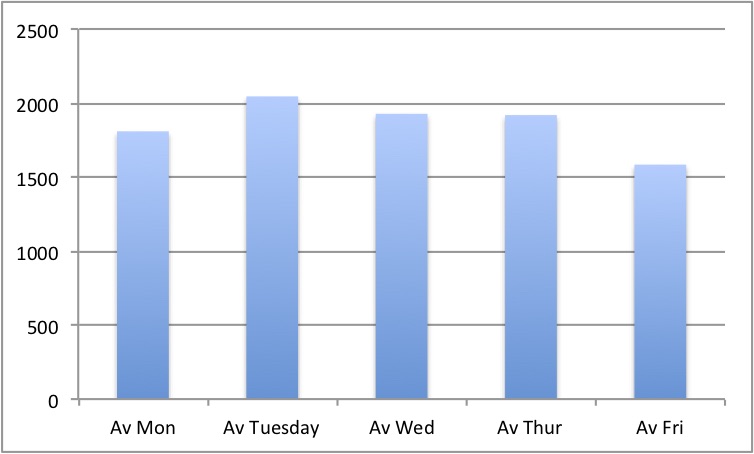 Figure 9 shows the weekdays in the ‘Best week’ (i.e. the one with the highest count).  Monday to Thursday averaged 2462 but Friday (as usual) was lower at 2087.

The average weekday count is 1856 but some days are more popular than others. Figure 10 shows the average counts for each weekday.  Tuesdays are the most popular, with an average of 2044 journeys. Wednesdays and Thursdays are not far behind. But Friday’s average is only 1583. Maybe people take long weekend breaks, generally starting on Fridays?

With the four years of data from the first counter in Royal College Street, we have been able to see some trends in the number of cycle journeys. They include the following:

It is regrettable that the Pancras Road counter has been so unreliable and that a great deal of potentially useful data has been lost. It was installed on 22nd September 2015, it had teething troubles during the first year, going out of service from 18th June 2016- 18th September 2016. It was taken down for service between 3rd and 14th March 2017. The data for the period between the 26th February and 21st June 2018 looks so untypical (i.e. not following the same patterns as other data at this site) that we have decided not to include it in our study.