Comparison of three years data from the cycle counter – a 23% increase and weekday totals frequently over 2000.

The cycle counter was installed in Royal College Street in mid-April 2014. Each year, we have reported on the the counts, comparing one year with the next. This report should have appeared in the summer when the third year of data became available. But better late than never! And there is the bonus of another six months of data to inspect.

Royal College Street – annual totals up by over 20%

The chart on the left compares the annual counts for the first three years (NB: northbound and SB: southbound). At a first glance we see that the annual total has continued to grow and with a bigger increase in the third year. 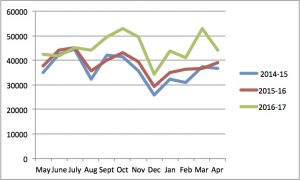 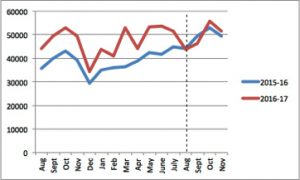 The chart on the left compares monthly counts for the first three years. The green line represents the period 1st May 2016 – 30th April 2017. The counts from July 2016 on shows a considerable increase in numbers over the previous 12 months (on average a 23% increase).

In October 2016 we noted that  More people are using Royal College Street since the northern extension was opened in mid July 2016. The chart on the right shows that this increase was maintained during the whole of the first year it was in place. The dashed line on the chart shows where the year is completed; after that, the counts for last year and this year are similar. 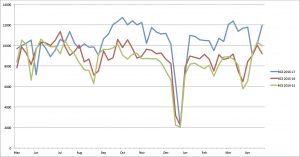 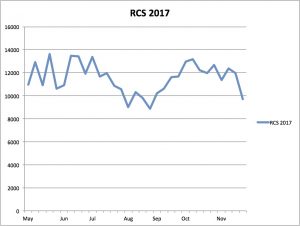 RCS weekly data from May to November 2017. Click to enlarge

The chart on the left compares counts over the entire week including weekends. From September 2016 on, the weekly totals were over 10,000 with the exception of a big dip during the Christmas-New Year period, a smaller dip around Easter and another in the second week of February. The largest weekly total was 12,730 and in 9 different weeks, the total was over 12,000 cycles. 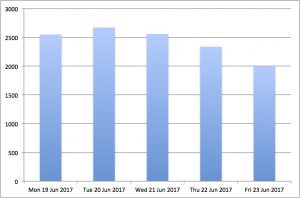 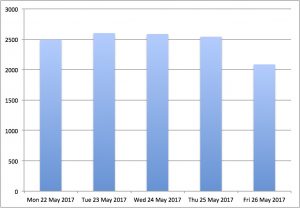 This website displays yesterday’s counts on the Home page. This year we kept on noticing that the weekday counts were regularly exceeding 2000. In fact this occurred on 138 weekdays in 2017 – and on 78 of those days, the count was over 2200.

Tuesday 20th June saw the maximum all time daily count of 2672. The chart on the left shows the counts for each day that week (Monday 19th June – Friday 23 June) in which even the Friday reached 2000. Our previous maximum daily total of 2627 was on Thursday 9th July 2015 the day of a tube strike.

The chart on the right shows the counts for another glorious week (Monday 22nd May – Friday 26th May) with every day except Friday having counts over 2500.

Counter in Pancras Road– a counter that fails from time to time. 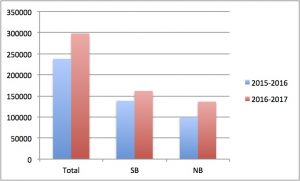 The Pancras Road cycle counter was installed on 22nd September 2015, it had teething troubles during the first year, going out of service from 18th June 2016- 18th September 2016. It was taken down for service between 3rd and 14th March 2017. The nearest we can get to making a comparison of the last two years is to compare the two sets of months October to May omitting March.

The southbound share on Pancras Road is greater than on Royal College Street, as many people join this route via St Pancras Way. But over the two years, it fell slightly from 58% to 54%, due to a greater increase in the number of northbound cycles of 37% vs 17%. 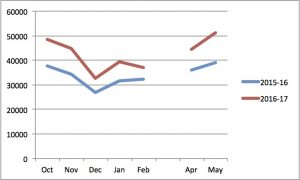 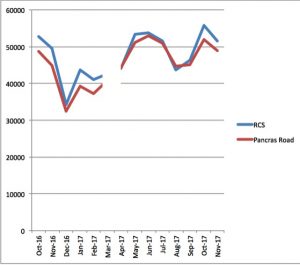 The chart on the left shows a comparison between 2015-16 and 2016-17 for the seven available months (Oct–Feb and Apr–May). The average increase is almost 25% when comparing the two years.

Other counts on Pancras Road

With all the gaps in the data, there is not much motivation to look in depth at the weekly and daily counts. But we have identified a maximum all time daily count of 2563 on Tuesday 20th Jun 2017.  We also note that in the period 1st May – 30th November 2017 the weekday counts were regularly exceeding 2000. In fact this occurred on 66 weekdays – and on 24 of those days, the count was over 2200 and seven over 2400.

Previous Posts about the cycle counters

Cycle Counter in Royal College Street Usage increased with the new tracks, so Camden Council have installed a cycle counter; post-implementation improvements and news about the northern and southern extensions. 20th April 2014

Camden’s cycle counters are now open data. Data from cycle counters on Royal College Street and Pancras Road is now open to public access and daily counts have been growing.